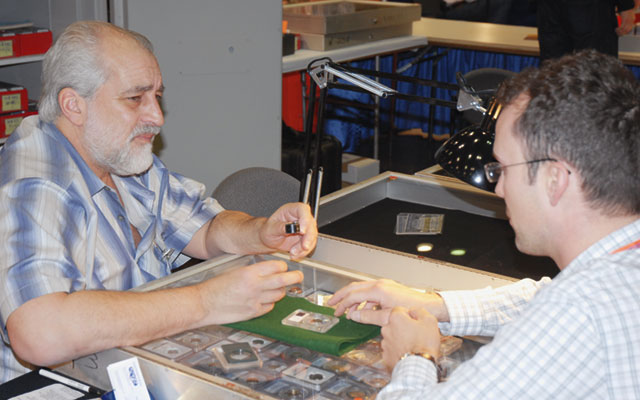 Fred Weinberg listens intently to fellow error coin dealer John Sullivan as they discuss the nuances of a particular coin in January 2015 at the Florida United Numismatists convention in Orlando. 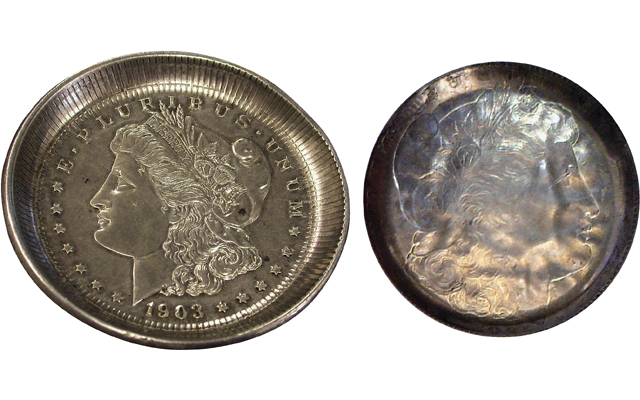 Spectacular error coins like this die cap 1903 Morgan dollar struck at the Philadelphia Mint are among the reasons collectors look for Weinberg’s table at a coin show. 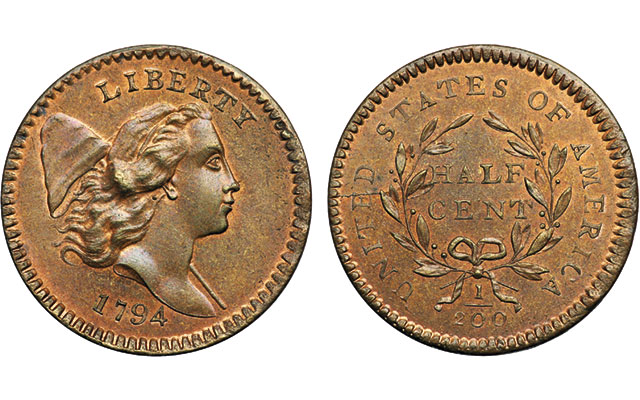 While he is known for expertise in error coins and U.S. gold coins, Weinberg located this extremely rare 1794 Liberty Cap, High Relief half cent during a gold buying trip in Switzerland in 1977.

This is the next in six profiles of seven numismatists who have been in the hobby professionally more than 40 years and which was first published in the April 6 Monthly edition of Coin World. Additional profiles will appear in the April 13, April 20 and April 27 Weekly issues.

While in college in Southern California in 1972, Weinberg said, he received a phone call from Jonathan’s Coins, in Inglewood, Calif., one of the largest coin shops in the country, to come to the shop and help in the purchase of a collection of error coins.

“I drove down to the shop, bought the deal, and the owner offered me a job, right then and there,” Weinberg said. “It took me three or four days to be able to tell my parents that I was quitting college and becoming a full-time coin dealer.”

“In 1972, at least [from my perspective] in Los Angeles,” Weinberg said, “the coin business consisted of coin shops, Coin World, a few coin shows, and a relatively small number of national coin dealers. Stack’s, Bowers and Ruddy, Paramount, as well as Lester Merkin, Abe Kosoff, Jerry Cohen and Abner Kreisberg, Art Kagin, Q. David Bowers, Audrey Bebee are just a very few of the older ‘names’ that I remember meeting at that time, at the larger shows in Southern California.”

Local coin shops all seemed to be the same — small, smoky, somewhat messy and unorganized, especially in the back offices, Weinberg said.

“Then, most coin shops literally were coin shops only — no stamps, jewelry, scrap metals, etc. — but a nice selection of collector coins for those who wanted to see their coins in-hand before purchasing them. Shops, shows, and the occasional auction were the main venue to buy coins.”

National dealers would ship coins to collectors who ordered them from an advertisement, or if the coin was on a serious collector’s want-list. With no Federal Express or overnight delivery services, the process of acquiring a coin through the U.S. Postal Service could easily take a week or more.

After working at Jonathan’s Coins for a year, Weinberg said, he was offered a job by collector-turned-dealer Harry Gordon of Numismatics Ltd., in Beverly Hills.

The large wholesale company had a bullion department alongside its numismatic department.

“Since gold was starting to go over $35 per ounce, the gold and silver bullion business was beginning to be important, and part of the coin industry,” Weinberg said. “Some of the newer coin dealers did both numismatic and bullion coins, while the older, more established dealerships kept strictly to collector coins only.”

At the same time, a few dealers were going over to Europe to purchase large quantities of fresh, mostly Brilliant Uncirculated U.S. gold coins that had been shipped overseas decades earlier, Weinberg said.

Weinberg said that, starting in 1973, he began accompanying Gordon to Europe, visiting banks and coin dealers in Switzerland, France, England, Germany, Lichtenstein, and other places, buying thousands of U.S. gold coins every six to eight weeks.

What happened to all those gold coins?

“Since the grading services didn’t exist at that time, what I did, and I believe most ‘Euro Dealers’ did, was to simply sort out the coins by BU’s and circ’s, and let the first person who came to our offices [have] ‘first shot’ at a price. After a certain number of coins were sold at that price, I’d lower the price $10 to $20, and that would be the next ‘pick price,’ and so on.”

One of those trips, in 1977, yielded a copper rarity — a 1794 Liberty Cap, High Relief half cent. Weinberg acquired the coin plus a 1916 Standing Liberty quarter dollar at a small coin show outside Zurich for the equivalent of $1,200 in U.S. funds.

The half cent was subsequently placed for $35,000 in 1978 into what eventually became known as the Missouri Cabinet.

The 1794 half cent, now graded PCGS MS-67 red and brown and stickered by Certified Acceptance Corp., realized $1.15 million when it was sold Jan. 26, 2014, at the Missouri Cabinet auction by Ira & Larry Goldberg, Auctioneers.

Coin shows such as those held by the American Numismatic Association, Florida United Numismatists, Central States Numismatic Society, as well as the Long Beach Expo and others, were the places to be.

“They were fun to go to, buy and sell, meet new dealers, start up decades-long friendships, and most importantly, learn about rare coins — how to grade them (getting tips from other dealers), how rare they were, and what was ‘hot’ or not,” Weinberg said. “With the exception of some classic series, most die varieties weren’t on anyone’s radar, and it wasn’t until the first edition of the Cherrypicker’s Guide [to Rare Die Varieties] that there started to be separate categories for mechanical errors and die varieties — until then, I would buy and sell major errors and die varieties, and carry both in inventory.”

Weinberg was one of six numismatic experts that certified as genuine in 2003 the George Walton specimen of 1913 Liberty Head 5-cent coin.

A member of the Professional Numismatists Guild since 1975, Weinberg has served the organization in a number of official capacities, including as its president.