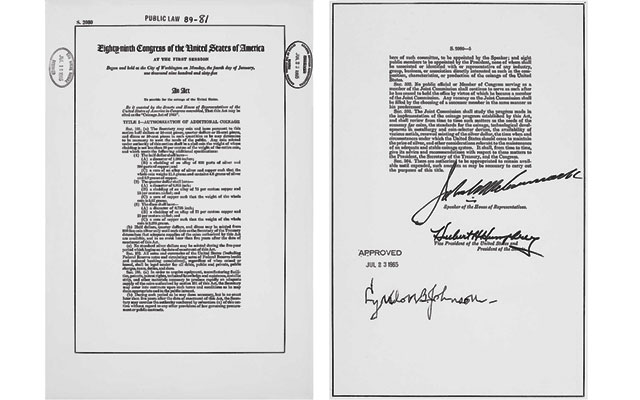 The Coinage Act of 1965 resulted in major changes to the composition of dimes, quarter dollars and half dollars. 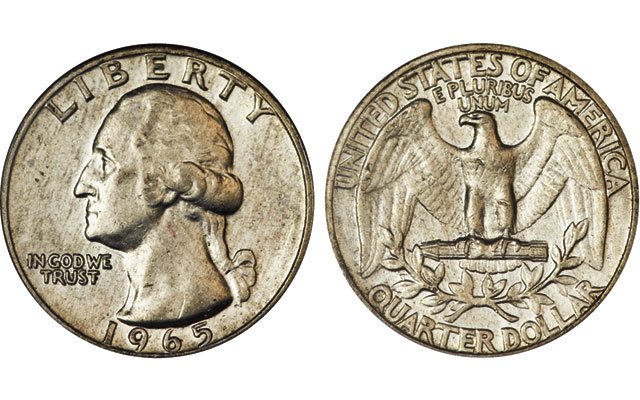 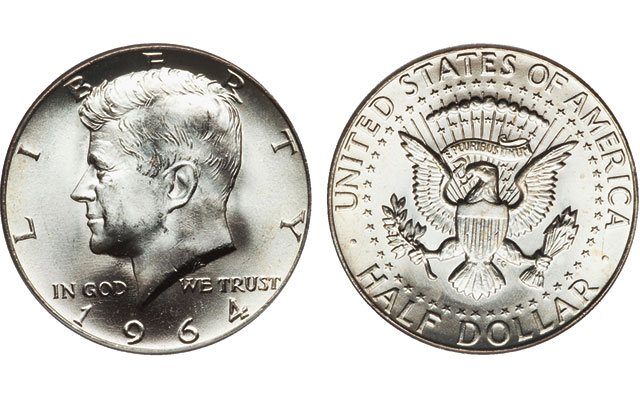 Rising consumer demand, skyrocketing silver prices and increased collector activity all contributed in the early 1960s to a massive coin shortage. Clad coins were the solution.

Coins were a critical part of the economy before credit cards and electronic transfers became common. Almost every purchase resulted in change in the form of coins; and those coins had real spending power. A half dollar in 1963 would purchase what takes $3.82 in today’s money.

On Feb. 11, 1963, the Arthur D. Little consulting firm reported to the Mint, “If the price of silver rises sufficiently to make domestic coins an attractive source of silver for industrial use, the Mint will be faced with the monumental task of replacing the silver coinage in circulation.”

The death warrant for silver coinage was signed Sept. 1, 1963, when silver hit $1.293 — the point at which a silver dollar contained a dollar’s worth of silver.

For decades, anyone with a paper silver certificate (U.S. paper money that was backed by silver) could take it the Treasury Department and exchange it for a silver dollar.

Knowledgeable dealers had been slowly using the bills to tap the Treasury hoard of $1,000-face-value bags of silver dollars, including many rare Carson City Mint coins, since the mid-1950s. But in 1963, the floodgates opened. Silver dollar buyers could turn their purchases around for an immediate profit.

Long lines of people clutching fists full of silver certificates snaked their way out of the Washington, D.C., Treasury Building on March 25, 1964, the last day Treasury Secretary C. Douglas Dillon permitted the exchanges. Henceforth, he said, the department would pay out silver in plain bars (with the weight marked in grease pencil) and tiny packets of granules, each containing 0.773 ounce of silver. Interest immediately waned.

In the end, the Treasury hoard of more than 100 million silver dollars had dwindled to about 3 million. The remaining coins were eventually sold at market prices in the General Services Administration auctions of the 1970s.

While silver would not cross the $1.38-an-ounce mark — the point at which 90 percent silver dimes, quarter dollars and half dollars are worth more as metal than as money — until 1966, interest immediately turned to them, both as a form of bullion investment and as a source of silver for industrial uses.

Since World War II, the world and the United States had used more silver — for both industrial uses and coinage — than was mined. In the United States, the difference was drawn down from the shrinking U.S. strategic stockpile.

Rising demand for coinage in commerce was augmented by collector and investor demand. By some estimates, as many as 5 million Americans were collecting coins. Many figured that if one coin was good, a roll was better and a bag was best.

Coin publications — Coin World boasted 170,000 subscribers to its weekly 120-page newspaper — were filled with advertisements for roll sets of commonly collected coins, such as Jefferson 5-cent pieces, and bags of recent coins of every denomination.

Some dealers amassed huge quantities of coins. On Sept. 9, 1964, Coin World reported that a St. Joseph, Mo., bank could not accommodate a coin dealer-customer’s request to store 10,000 bags of coins in its vault.

Coin collectors took it on the chin for collecting in general and the bag boys in particular. On May 21, 1965, Sen. Alan Bible, D-Nev., even went so far as to introduce a bill that would have banned the collecting of coins not deemed numismatically valuable by the Treasury Department.

Regardless of cause, the Mint knew it had a problem. The Treasury Department tackled the coin shortage in three stages — freezing dates on coins in 1964, restoring minting at the San Francisco Assay Office and switching to clad coins in 1965.

On Sept. 8, 1964, five days after President Lyndon B. Johnson signed authorizing legislation, the Mint announced a date freeze. Coins minted after Dec. 31, 1964, would continue to bear the 1964 date. The move was aimed at hoarding, but did nothing to address the silver issue.

U.S. Rep. Lenore Sullivan, D-Mo., said, “This bill will not and cannot solve the coin shortage. But to the extent that it brings out of hiding in bank vaults and elsewhere quantities of new uncirculated coins being held for speculation as potential ‘rare’ coins, it will certainly have an important effect in the present coin shortage.”

Rep. W.R. Poage, D-Texas, objected to the date freeze, but to no avail. “I do not believe we can ever solve a problem of this kind by simply stating something on our coins that is not true. If in the years 1965 we print 1964 on the coins, we are simply making a false statement and I just do not think that is a very smart thing for the U.S. government to do.”

The 15 percent figure, Battelle calculated, would enable the Mint to continue producing silver coins through the mid- to late 1970s. As it turned out, the Mint pulled the plug on 40 percent silver half dollars in 1970.

While Battelle completed its report on Feb. 12, 1965, the Mint initially kept it under wraps, briefing key players and building support in Congress. In early June the House Committee on Banking and Currency held hearings on the proposed changes. The House and the Senate quickly approved the clad-coinage bill and sent it to the president, who signed it July 23.

However, the mints continued producing 1964-dated silver dimes, quarter dollars and half dollars. The Treasury Department reasoned that an abrupt shift to just clad coins would trigger even more hoarding of silver coins.

On Sept. 1, 1965, the San Francisco Assay Office began minting coins for the first time since 1955 as part of the effort to overcome the coin shortage. These 1964-dated cents and 5-cent pieces bear no Mint mark and are indistinguishable from Philadelphia Mint coins.

All three minting facilities would continue to produce 1965-dated coins until Aug. 1, 1966, when the operations shifted to 1966-dated coins.

The steps to increase coinage production had the intended effect of ending the coin shortage.

On Feb. 8, 1966, U.S. Rep. Dante B. Fascell, D-Fla., chairman of the House subcommittee on legal and monetary affairs, said: “Conditions have improved tremendously since that time (2 years ago). We know that stores generally are not encountering too much difficulty in making change.”

At the American Numismatic Association convention on Aug. 19, 1966, in Chicago, Assistant Treasury Secretary Robert Wallace reported that the coin shortage was over.