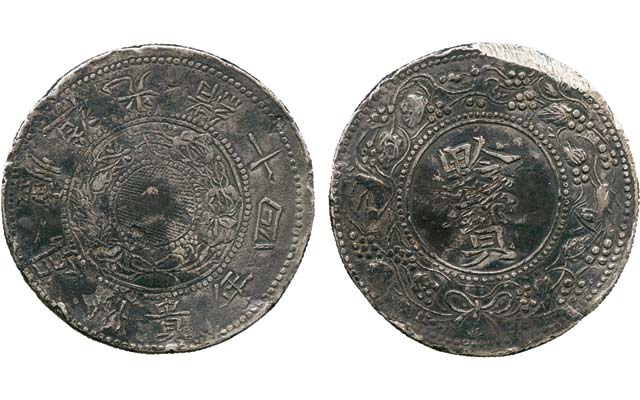 The most famous Chinese coin from Kweichow Province is the 1928 Auto dollar, but an issue 40 years earlier is even rarer.

The coin was made during a period when Kweichow lacked a mint. The province instead operated a government furnace where sycee, silver or gold ingots, were refined and molded.

In 1888 and 1890, during the reign of Kuang Hsu, the province issued a small number of coins called “cakes,” apparently for their shape. These coins feature designs similar to then current Japanese silver dollars, according to Illustrated Catalogue of Chinese Gold & Silver Coins, by Lin Gwo Ming and edited by Ma Tak Wo. According to the Lin and Ma book, the refinery produced the “cake” coins.

These coins are not cataloged by Eduard Kann is his famous 1954 opus, Illustrated Catalog of Chinese Coins, Gold, Silver, Nickel & Aluminum.

The example in the Hong Kong auction displays several rim nicks, several small planchet defects on the obverse, scratches at the center and a filed rim on the reverse.