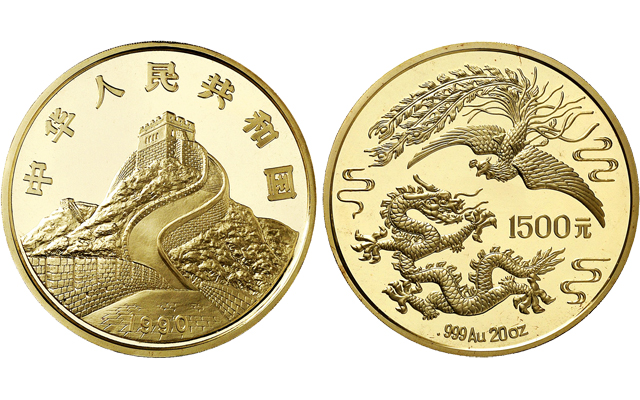 In 1990, China issued a program of commemorative coins known to collectors today as the “Phoenix and Dragon” coins.

“What appears to be of decorative value to us has clear implications in the Chinese culture,” according to Künker.

The dragon and phoenix not only represent emperor and empress but are among the traditional symbols of good luck. “Feng shui advisors recommend giving an art work with a depiction of this kind to ensure a happy wedding day and a long, harmonious marriage,” according to Künker.

The fact that collectors of modern (1979 to the present) Chinese coins seek quality and rarity is well known.

The resulting hammer price of €80,000 (about $111,300 in U.S. funds) is “evidence that the Chinese people cherish their present coins just like their ancient ones,” the auction house reported after the sale.

The buyer’s fee varies depending on lot and location of the winning bidder, and may range from 15 to 23 percent, so it is not reflected in the totals here.

The set was a highlight of one of four auctions conducted across five days (March 10 to 14) in Osnabrück. Together all four sales (in total containing 6,129 lots) realized a hammer price of an estimated €8.75 million (about $12.1 million dollars U.S.).

Catalogs and price realized for the firm’s spring auctions may be viewed online at the firm’s website, www.kuenker.de. For more details, telephone the firm at (011) 49 541 96 20 or email it at service@kuenker.de.