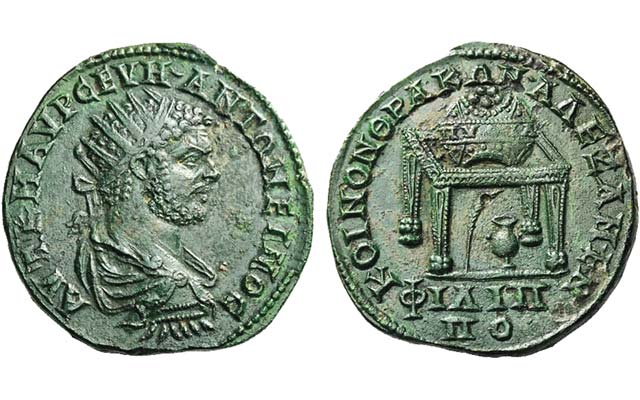 A circa A.D. 214 bronze medallion or hexassarion celebrating the Pythian Games under Roman emperor Caracalla realized 3,600 Swiss francs ($3,865 U.S.) in a May 18 auction.

If you want to collect ancient coins celebrating sporting events, the mind naturally turns to those Greek issues for the Olympics.

But Roman coins also offer options for a topical collection focusing on ancient sports. An example of a Roman bronze piece marking the Pythian Games sold May 18 at Nomos Ag’s auction No. 10.

The A.D. 214 bronze hexassarion or medallion was issued at Philippopolis, Thrace, during the reign of the notorious Caracalla.

The piece (which measures 36 millimeters in diameter, slightly smaller than a Morgan silver dollar) realized a hammer price of 3,600 Swiss francs ($3,865 in U.S. funds). The buyer’s fee is 20 percent, though final price varies depending on bidding method and bidder location.

The Pythian Games were originally held at the temple of Apollo in Delphi beginning in the sixth century B.C., as one of four Panhellenic Games. However, during his reign (198 to 217), Caracalla established the Pythian Games at Thrace.

According to the auction house, “This piece shows one of the elaborate crowns given to the victor: it is carefully named so that we can have no doubt to which festival it relates.”

The Extremely Fine coin has a green patina.

To learn about the auction results, visit the Nomos website.