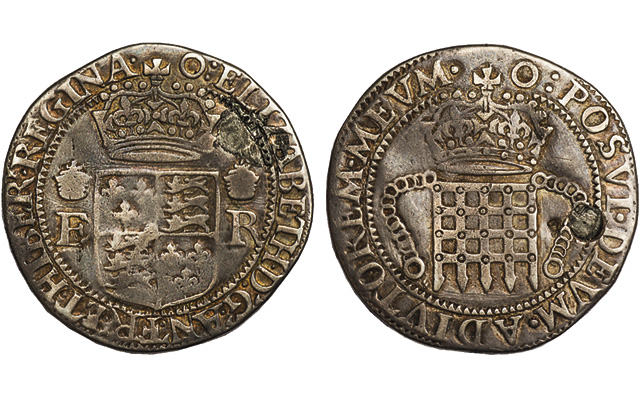 A circa 1600 to 1601 silver 2-testern coin was struck in Elizabethan England for trade to the East Indies. This About Very Fine example sold Dec. 16 for a hammer price equivalent to about $1,475 U.S.

Collectors of United States coins are aware of a special issue of U.S. coinage in the 1870s that was meant for use thousands of miles from the home country.

England has America beat by 172 years in resorting to that concept.

Though the American Trade dollar (minted for use in trade with Asia) entered circulation in 1873, the idea of issuing a special silver coin for English trade dates as least as far back as Queen Elizabeth I. In 1600 and 1601, four denominations of coinage — the 1-, 2-, 4- and 8-testern pieces — were coined at the Tower Mint for the first voyage of the incorporated “Company of Merchants of London Trading into the East Indies.”

An example of one of the coins was sold Dec. 16 by St. James’s Auctions in London.

The Portcullis money is named for the portcullis composing the reverse design. A portcullis is a gate with a heavy, sliding grate, used in fortifications. The obverse shows the royal arms.

Portcullis coins were struck to the same weights of equivalent Spanish 1-, 2-, 4- and 8-real coins.

Portcullis coins are usually found well-worn, despite the fact that coins of this design were used only briefly.

For more information about other lots in the auction, visit its website.