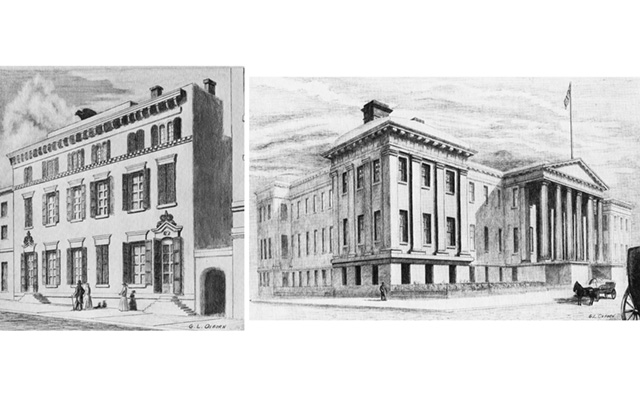 In the 1860s, two U.S. Mint production facilities were in operation — one in Philadelphia and one in San Francisco.

The latter had opened in 1854 in slightly remodeled facilities earlier used by Moffat & Co., private coiners of gold. The building was poorly ventilated and conditions were cramped. On Feb. 10, 1866, melter and refiner Walter S. Denio died of lung congestion caused by noxious fumes. Subsequently Mint Director James Pollock, based at the Philadelphia facility, made this plea in his Annual Report:

“I cannot too earnestly urge upon the government the importance of erecting a new Mint building at San Francisco. The present building is not only wholly unfitted for the large and increasing business of that Branch Mint, but unsafe, and unworthy of the great mineral wealth of the Pacific States. ...”

This set in motion a slow process that resulted in the cornerstone being laid for the new San Francisco Mint in 1870 and the building opening for business in 1874. The coinage of 1870 remains somewhat of a mystery today.

It is said that two 1870-S Indian Head gold $3 coins were made to put in the cornerstone. Only one is known now — at the Harry W. Bass Jr. Gallery in the American Numismatic Association headquarters in Colorado Springs, Colo. About 10 1870-S Seated Liberty dollars are known today, but there is no record of their having been coined. About 35 years ago, an 1870-S Seated Liberty half dime, for which no record of production exists, was brought in to RARCOA, the Chicago dealership. The coin is unique.

In the meantime, plans were being laid for two more Mints. In 1870, the Carson City Mint opened. The second facility was at The Dalles, a town on the Columbia River in Oregon. Gold and silver were found in quantity in the state in the 1860s, and it was desired to have a federal Mint where these metals could be processed and coined.

On July 4, 1864, Congress approved legislation for the facility. A square block of land was purchased. Work commenced in 1869. Fate was not kind, and in 1871 the structure, still being worked on, was ravaged by fire. The mess was cleaned up, and work began anew. It was soon realized that the boom of the 1860s was over, and the structure was abandoned. In 1875 the building and land were gifted to the state of Oregon. It remains today, now used for commercial purposes. Accordingly, we have no coins with TD Mint marks.