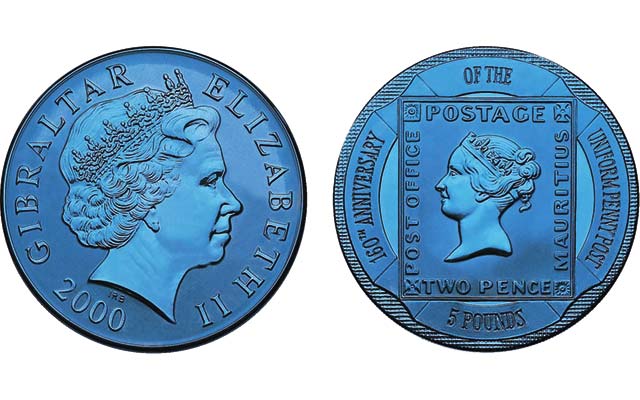 Gibraltar cooperated with the Pobjoy Mint in 2000 to issue what Pobjoy calls the first blue coin in the world. The commemorative naturally honors the Blue Mauritius stamp.

Editor's note: The following is the second of a multi-part Coin World series about the intersection of coins and postage stamps prepared by Jeff Starck for the May 2015 monthly edition of Coin World.

The stamp known as the “Blue Mauritius” has sparked a play and a forthcoming movie, due for release in 2016.

The stamp is one of the first two Mauritius stamps issued, which are among the world’s most valuable.

Mauritius is a small island in the Indian Ocean encompassing about 720 square miles. It is more than 500 miles east of the much larger island Madagascar, which is located off the southeast coast of the African continent.

The Mauritius “Post Office” stamps (Scott 1 and 2) were the first stamps authorized by any British colonial government. A few dozen 1847 Mauritius 1-penny orange stamps and one 2-penny blue Queen Victoria stamp erroneously inscribed “Post Office” are still in existence. The inscription was corrected on later stamps to read “Post Paid.”

A local engraver named Joseph O. Barnard prepared the two designs, which, like the Penny Black, show the image of Queen Victoria.

Lady Elizabeth Gomm, the wife of the governor of Mauritius, requested the stamps, to mail invitations to her costume ball.

Very few examples of the 2-penny blue stamp are known, with the stories of their discovery the fabric of philatelics.

In 1902, a young boy in France discovered a cover (an envelope) franked with singles of each stamp. The boy sold the cover to a stamp dealer, and it was resold several times, landing in prominent collections.

The two-penny stamp — the Blue Mauritius — is valued in used condition at $1.7 million. It is not valued unused.

In 2000, the Pobjoy Mint issued the world’s first colored titanium coin to honor the Blue Mauritius (also called the “tuppeny blue,” for its 2-penny face value).

The £5 coin, issued for Gibraltar, was colored blue through an electrochemical process that the Pobjoy Mint did not disclose.

In addition, a companion ringed-bimetallic 1-crown coin, with a gold ring and blue titanium center, was also issued in the program.