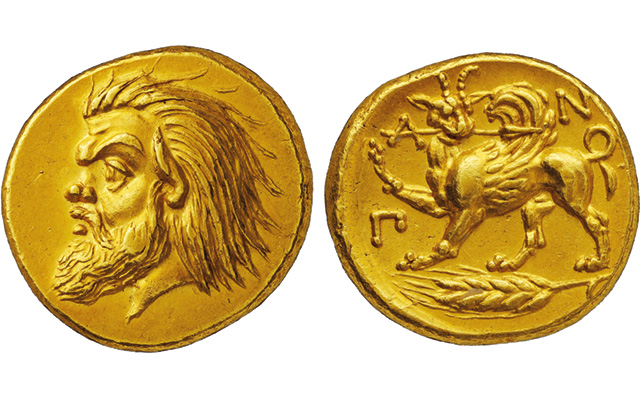 A rare gold stater from the ancient Greek city of Pantikapaion and pedigreed to the Garrett Collection realized a hammer price of 370,000 Swiss francs ($381,259 U.S.) Nov. 24 at auction.

While many collectors know of the monumental collection of U.S. coins built by the Garrett family of Baltimore, lesser known is the Garrett world coin collection.

A highlight of the collection, a gold stater from the Black Sea town of Pantikapaion in ancient Greece, was also a highlight of Numismatica Genevensis SA’s Nov. 24 and 25 auction.

The circa 350 B.C. coin was once owned by John Work Garrett, president of the Baltimore & Ohio Railroad. He bequeathed the collection, which had been built with two other family members, to the Johns Hopkins University in 1942. The U.S. portion was consigned to auction in the late 1970s and early 1980s. Bank Leu and Numismatic Fine Arts jointly sold the Garrett Collection’s world offerings in three auctions in 1984 and 1985.

Before residing in the Garrett Collection, the stater was also once in the collection of Russia’s Grand Duke George Mikhailovich.

The coin shows the god Pan on the obverse with a griffon in a lion’s body on the reverse. The gold used in the coin was imported to the Crimea from the Ural Mountain region. These large staters were issued only for a few decades before being discontinued, and thus are rare.

For complete details of the auction, visit the Numismatica Genevensis website.