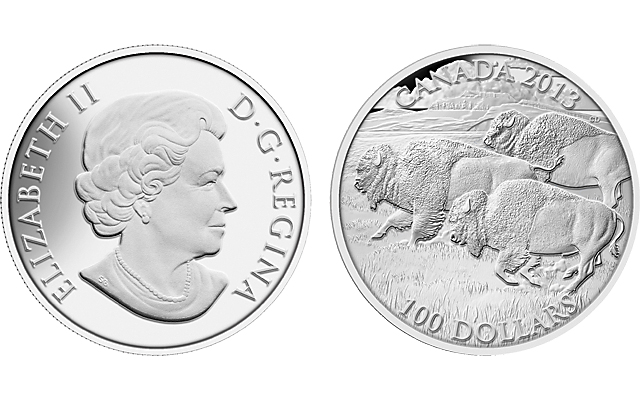 In early 2013, the Royal Canadian Mint launched a new series, silver $100 coins sold at face value. The first coin in the series shows the wood bison. 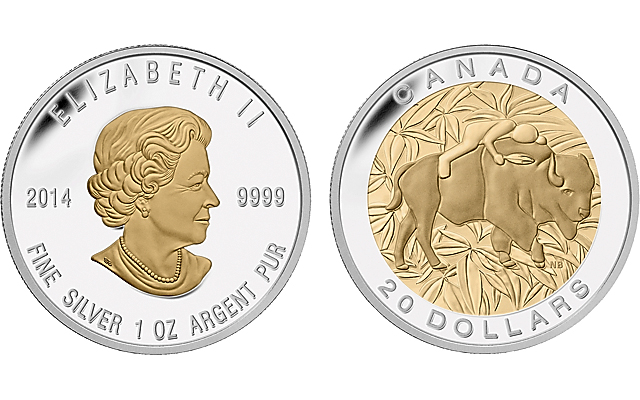 First Nations art in Canada celebrates the bison and the respect the people have for the animal, which sacrifices itself time and time again so that the people may live. 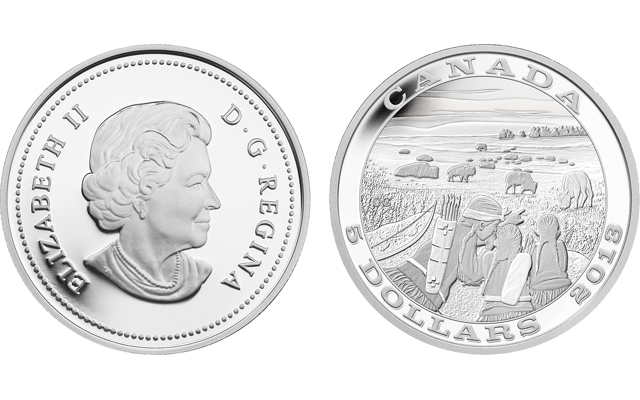 The White Buffalo is sacred to native First Nations people in Canada. A father and his two sons spare the mystical mammal on the Proof silver $5 coin marking the tradition of hunting.

Editor's note: The following is the third of a multi-part Coin World series about the prominence of bison on coins from all over the world prepared by Jeff Starck for the August 2014 monthly edition of Coin World.

Read the earlier posts in the series:

Recent coins offer collectors of all budgets the opportunity to build a bison collection.

Affordable options include the 2013 2-zloty coin from Poland, which retails for about $3 to $5 in U.S. funds, thanks to its circulating status and low face value (equivalent to about 66 cents U.S.).

The Nordic gold shows two bison nearly head-to-head. The coin has a mintage of 1 million pieces.

Nordic gold, a base metal alloy of copper, aluminum, zinc and tin, is meant to approximate the color of real gold but be inexpensive to produce.

The wood bison, like the more widely known plains bison, was nearly hunted to extinction by the early 20th century. According to the RCM, Canada is the only country in the world where wood bison live in the wild.

The Wood Bison silver bullion coin was the final design in the RCM’s six-coin, three-year Canadian Wildlife series, and like other coins in the program, the coin had a mintage limit of 1 million pieces. This last coin features Emily Damstra’s design of a left-facing bison galloping in snow at the edge of a forest. Specifications, metal purity references and the nation’s name complete the reverse.

A wood bison appears on another coin from the RCM issued in 2013.

The Reverse Proof coin was sold for its $100 face value plus shipping charges, and sold out its 50,000 mintage limit the first day.

Bison are extremely important in the native cultures indigenous to Canada, and several coins celebrate the connection.

On May 6 the RCM issued the second piece in its Seven Sacred Teachings series of Proof .9999 fine silver $20 coins with gold plating.

Each coin in the program features a reverse by Nathalie Bertin, a Métis artist inspired by her Algonquin heritage.

The bison is one of the seven totemic creatures that comprise the Seven Sacred Teachings practiced by Native American peoples for living a full and happy life.

Many tribes reference the bison for its lesson of respect, in that the bison sacrifices its life to allow the natives to live.

In the Bertin design, a bison carries a human figure on its back in comfort and security.

The eagle feather in the human’s hand is a ceremonial object often presented as a sign of respect.

Another Canadian coin designed by a First Nations artist is the Proof 2013 Tradition of Hunting  Bison .9999 fine silver $5 coin.

Released Nov. 5, the coin features Coast Salish artist Darlene Gait’s “captivating narrative of two young boys surveying a bison herd prior to their first hunt while their father points to the miraculous White Buffalo,” according to the RCM.

The white bison, a sacred symbol, is spared from the hunt. The chances of a white bison being born have been estimated at 1 in 6 million. A white buffalo (bison) is so rare that its birth is deemed “a miracle, a harbinger of important change that brings with it the promise of hope and spiritual healing for Mother Earth,” according to the RCM.

Perhaps the coin is the perfect starting point for someone to begin a new collection of bison on coins. Many additional issues beyond those detailed here are eligible for such a collection, and the topic would be within reach for many collectors searching for new collecting pastures.