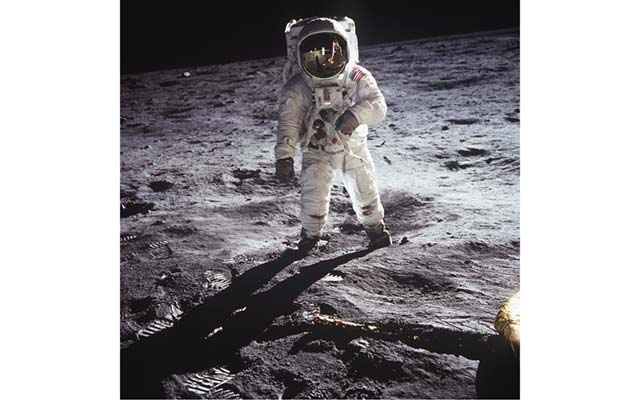 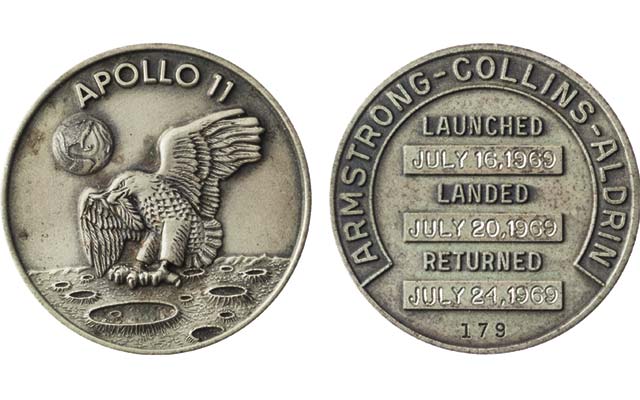 Are super-sized silver commemorative coins in store for 2019?

A bill to mint commemorative coins in 2019 recognizing the 50th anniversary of the first manned landing on the moon has been introduced in the House of Representatives. In addition to the standard commemorative gold $5 half eagles, silver dollars and copper-nickel clad half dollars, the legislation calls for not more than 100,000 Proof 5-ounce .999 fine silver dollars struck on a 3-inch-diameter planchet similar to the 5-ounce America the Beautiful quarter dollars.

Space-flown medal from Apollo 11 mission sells for $27,500 in Heritage auction

This would be the first time for the 5-ounce format to be used for commemorative coins.

In addition, the bill calls for the program’s coins to use curved surfaces similar to coins from the U.S. Mint’s popular 2014 National Baseball Hall of Fame commemorative program.

Rep. Posey worked on the Apollo program as a young man and said in a June 11 press release, “The United States remains the only country to have ever landed humans on a celestial body off the Earth and brought them home safely.” He added, “Honoring that great feat and recognizing astronauts [Neil] Armstrong, [Edwin Eugene `Buzz’] Aldrin and [Michael] Collins, who made this historic journey, is what our bipartisan legislation is all about.”

The findings portion of the legislation adds, “Apollo 11 accomplished the national goal set forth in 1961 by President John F. Kennedy, who stated, ‘We choose to go to the moon. We choose to go to the moon in this decade and do the other things, not because they are easy, but because they are hard, because that goal will serve to organize and measure the best of our energies and skills, because that challenge is one that we are willing to accept, one we are unwilling to postpone, and one which we intend to win.’ ”

The bill points out that the achievement was more than just technological, stating, “At the height of the Cold War, the Apollo space program provided the United States and the free world with a powerful symbolic win, demonstrating the strength, ambition, and determination of the United States in technological and economic advancement, and securing our Nation’s leadership in space for generations to come.”

The bill calls for some challenging technical requirements, writing that the proposed commemoratives, “shall be produced in a fashion similar to the 2014 National Baseball Hall of Fame 75th Anniversary Commemorative Coin, so that the reverse of the coin is convex to more closely resemble the faceplate of the astronaut’s helmet of the time and the obverse concave, providing a more dramatic display of the obverse design.”

Beyond the concave/convex element, the bill specifies, “It is the sense of Congress that, to the extent possible without significantly adding to the purchase price of the coins, the coins minted under this Act should be produced with the design of the reverse of the coins continuing over what would otherwise be the edge of the coins, such that the reverse design extends all the way to the obverse design.”

The common obverse design for the four coin types will be selected from a juried, compensated competition and is to be emblematic of the U.S. space program leading up to the first manned moon landing. Artists, U.S. Mint engravers and members of the public will be invited to submit designs and the submissions will be made anonymous until the final selection is made. Winning designers will be paid not less than $5,000.

The designs are to be selected by the Secretary of the Treasury after consultation with the Commission of Fine Arts, with the administration of NASA also having a say in the reverse design.

The reverse design is specified to depict a close-up of the famous “Buzz Aldrin on the Moon” photograph that was taken July 20, 1969. The legislation specifies that the design should show, “just the visor and part of the helmet of astronaut Edwin Eugene `Buzz’ Aldrin, Jr., in which the visor reflects the image of the United States flag and the lunar lander.”

Surcharges of $35 per $5 coin, $10 per regular dollar, $5 per half dollar and $50 per 5-ounce silver dollar are to be split between several entities. Half will be allocated to the Smithsonian Institution’s National Air and Space Museum’s “Destination Moon” exhibit to fund the design and maintenance of the exhibit and to support a traveling version. Twenty-five percent will go to the Astronauts Memorial Foundation, for costs related to the preservation, maintenance, and enhancement of the Astronauts Memorial and for promotion of space exploration through educational initiatives. The final quarter will go to the Astronaut Scholarship Foundation to aid its missions of promoting the importance of science and technology to the general public and of aiding the United States in retaining its world leadership in science and technology by providing college scholarships for the very best and brightest students pursuing degrees in science, technology, engineering, or mathematics.

The bill has been referred to the House Committee on Financial Services where it sits with seven cosponsors. The website GovTrack.us, which monitors legislation, estimates that the bill has a 13 percent chance of being enacted.