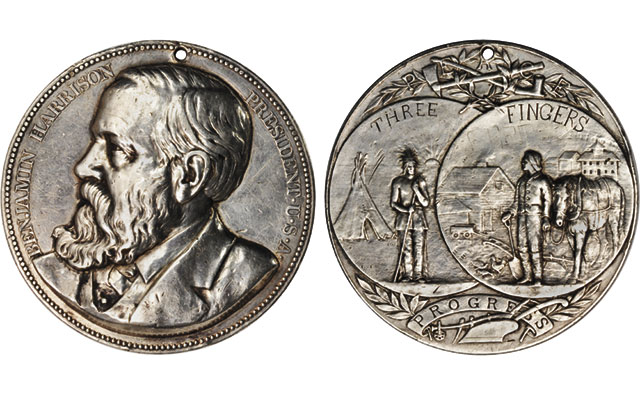 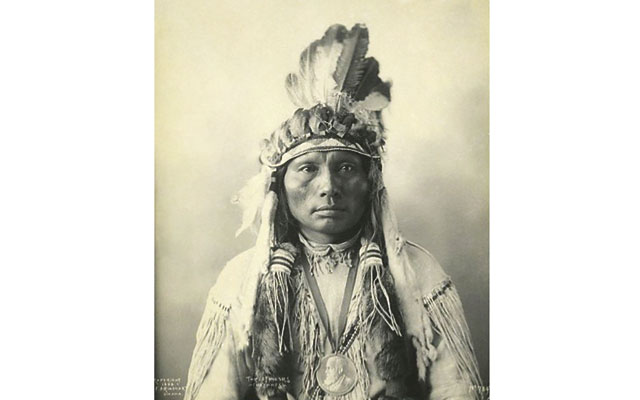 The name of Southern Cheyenne Chief Three Fingers is hand-engraved into the reverse of the medal.

A silver Benjamin Harrison Indian peace medal that will be offered in Stack’s Bowers Galleries New York Americana Showcase and Rarities Night Auction Feb. 5 and 6, 2015, was recently discovered by the owner in an unusual venue.

According to John Pack, Stack’s Bowers’ executive director of consignments, the medal was acquired by the consignor’s family several years ago at a yard sale.

The 76-millimeter silver medal was originally presented in the late 1800s to one South Cheyenne chief and passed on to another, according to Pack.

After receiving photographs and researching the medal, Pack was able to determine the medal had been presented to Buffalo Meat, of the Southern Cheyenne. The medal, a new discovery and one of only seven of the type known to survive, eventually became the property of Buffalo Meat’s contemporary, Chief Three Fingers of the South Cheyenne.

The inscription THREE FINGERS is hand cut into the reverse of the medal, which allowed Pack to identify the original recipient and the reason it was awarded. The engraving of Three Fingers’ name is in a similar style to that seen on three other Harrison medals.

“It is very rare but a great pleasure to be able to assign an original owner to one of these medals,” Pack said.

“As soon as I saw the images of the medal, I knew it was special and I was eager to research it in the hopes that a great story would unfold, and that it did,” said Pack, who cataloged the medal for sale.

The medal was one of one of 18 issued to members of the Southern Cheyenne and Arapahoe tribes who were considered helpful in the consummation of the sale of a vast portion of Indian Territory to the United States for $1.5 million in October 1890.

Pack said it is believed that 27 of these silver were medals struck in 1890 and 1891; they were the last ones made for official distribution amongst Native Americans.

The medal’s obverse depicts a bust left of Harrison. The reverse depicts overlapping circles contrasting “civilized” and nomadic life, with PEACE and crossed tomahawk and peace pipe above.

The reverse die is held at the Philadelphia Mint.