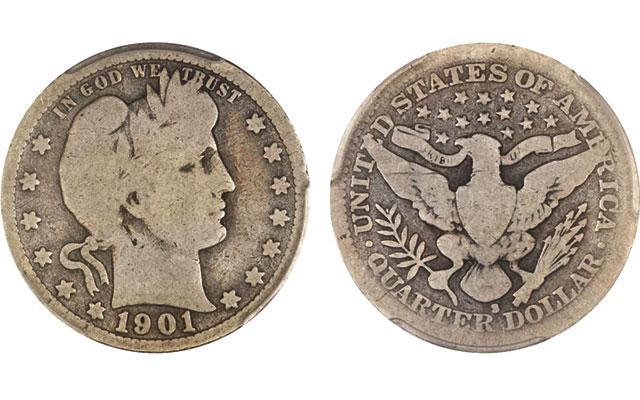 A 1901-S Barber quarter dollar graded PCGS Good 4 with a green CAC sticker sold for $5,875 at auction last year. The price is right in between what a typical Good coin and a Very Good example would sell for.

The 1901-S Barber quarter dollar has a reputation as the rarest regular issue 20th century coin, with a low mintage of 72,664 pieces. Most examples today are in low grades and the issue enjoyed heavy circulation. While collectors benefit from having a wide-range of well-circulated examples to select from, with many in grades of Fair and About Good, the coins often have impairments such as cleaning or damage. Mid-range coins in grades around Fine are scarce.

Here is one of three that represent the different price and quality levels within the Good 4 grade:

The story: There are examples that are OK for the grade, and then there is the occasional example that is nearly perfect for the grade. This 1901-S Barber quarter dollar is about as good as it gets, for a Good 4 coin. It offers very pleasing surfaces with color described as “dove-gray and steel blue” and virtually full rims on the reverse.

Graded Good 4 by Professional Coin Grading Service with a green Certified Acceptance Corp. sticker indicating quality within the grade, it brought a strong $5,875 at an April 23, 2013, Heritage auction. That price is substantially more than the $4,000 that a solid Good 4 example might bring, but less than the $8,000 that a Very Good 8 example may realize at auction.