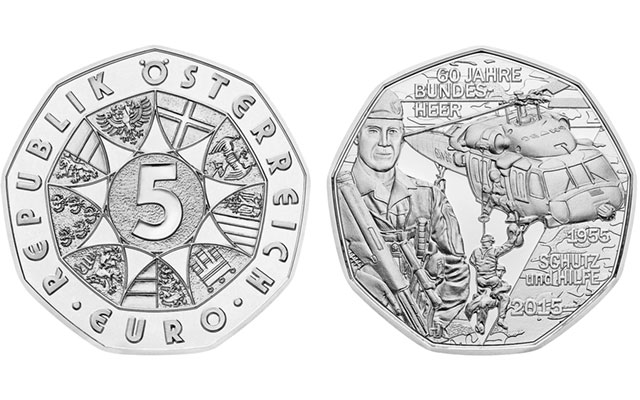 The Austrian Mint’s newest 2015 commemorative €5 coin is due to be released May 6, to honor the Austrian Federal Army’s 60th anniversary.

The Austrian Mint on May 6 will issue a 2015 commemorative silver €5 coin in honor of the 60th anniversary of the Austrian Federal Army (Bundesheer).

The modern Austrian army was formed in 1955 when the post-World War II Allied occupation of Austria ended with the signing of the Austrian State Treaty, declaring Austria a neutral, peaceful country.

The reverse of the silver coin depicts a rescue operation during a peacekeeping mission. The Blackhawk helicopter, key to such undertakings, hovers in place while army personnel perform a rescue, with a military member in the foreground. The reverse also bears the words 60 JAHRE BUNDESHEER (60 Years Austrian Federal Army), the anniversary dates 1955 2015, and the words SCHUTZ UND HILFE (meaning protection and help, as in a search and rescue operation).

The obverse of the nine-sided coin is Austria’s standard €5 design, the denomination encircled by the shields of the nine federal provinces of Austria.

Signed on May 15, 1955, the Austria State Treaty brought an end to the occupation of the country in the aftermath of World War II. When American forces left Austria, the United States also left vehicles, munitions and uniforms, which were greatly needed by the new Austrian Federal Army.

The Special Uncirculated 2015 .800 fine silver €5 coin weighs 10 grams and measures 28.5 millimeters in diameter. The coin has a maximum mintage of 50,000 pieces, and each coin is sealed in an informative blister pack.

Collectors in the United States and Canada may purchase the Austrian Army coin by contacting the Austrian Mint website.

Do you like coins of Austria? Here are some more Coin World stories!