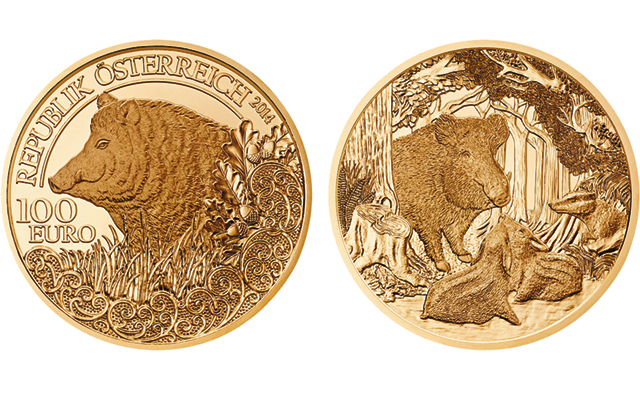 The wild boar graces a Proof 2014 gold €100 coin from Austria’s Wildlife in Our Sights series.

The Austrian Mint’s second coin in the annual gold Wildlife in Our Sights series celebrates the wild boar.

Due for release Oct. 29, the 2014 Wild Boar .986 fine gold €100 coin shows a single boar on the obverse, facing the viewer’s left. The animal is surrounded by the grasses, other vegetation, and acorns that often are part of its meals.

The obverse also bears the country name in German, REPUBLIK ÖSTERREICH, the 2014 date, and the face value.

The obverse was designed and engraved by the mint’s chief engraver, Thomas Pesendorfer.

The reverse shows a female watching over her two young offspring as they wallow playfully in the mud. A badger looks on in the woodland habitat that both animals share.

The reverse was designed and engraved by mint engraver Helmut Andexlinger.

A wooden collector case with a rustic design, adorned with a shield designed and crafted by the mint’s in-house engravers, is available for the series.

Two distributors offer the coin to collectors in North America at prices they will set individually.