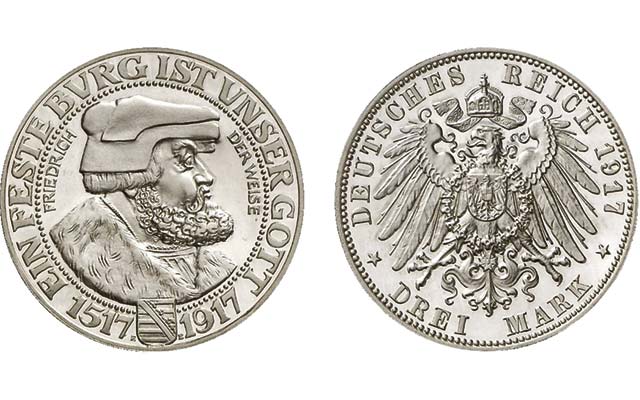 The rarest silver coin of the German states, a Proof 1917 silver 3-mark piece of Saxony, highlights Fritz Rudolph Künker’s auction No. 264, scheduled for June 24 and 25 in Germany.

When Martin Luther drew the ire of the Catholic Church in 1517, it was the elector of Saxony, Friedrich the Wise, who stepped in and protected him.

In 1917, the German State of Saxony issued a Proof silver 3-mark coin celebrating the 400th anniversary of the Reformation. With a mintage of 100 pieces, the coin is the rarest silver coin of the German states, according to the firm. An example of the coin leads Fritz Rudolf Künker’ auction No. 264, which is scheduled to be held in Osnabrück on June 24 and 25.

The coin was issued during the reign of Frederick August III, late during World War I and about one year before the German states stopped issuing their own coins.

The design is based on a special taler issued in 1522, which features an image of Friedrich the Wise based on a painting by Lucas Cranach the elder.

The scarcity of the mintage is exacerbated by the fact that many (perhaps half) were lost to war, either in World War I or World War II, according to the auction firm. Because of its design and status as the rarest silver coin from that era of German coinage, the coin remains popular today.