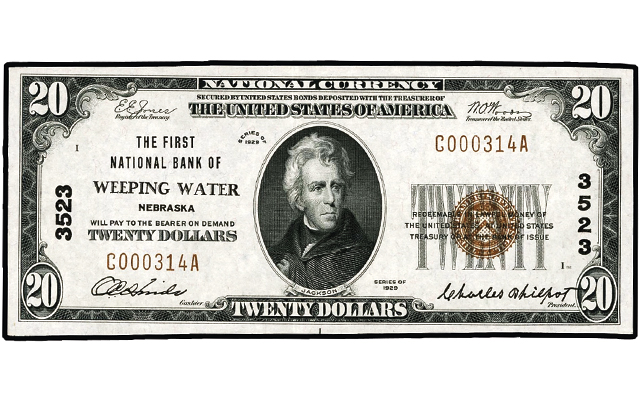 This Series 1929 $20 national bank note issued by the First National Bank of Weeping Water (Nebraska), sold for $900 on Sept. 17 in a Knight Live, Internet Auction by Lyn Knight Currency Auctions.

The note was graded Choice About Uncirculated by the auction firm. All prices do not include the buyer’s fee, which differs by method of payment.

A Series 1929 $100 national bank note issued by the Bank of America National Trust and Savings Association in San Francisco, sold for $325 The note was graded Very Fine by the auction firm.

The note was graded by the auction firm as Choice Uncirculated.

The notes were among the more than 1,300 lots of U.S. and world notes in Knight’s four-session auction.

A 1939 500-afghani note of Afghanistan, featuring a portrait of King Muhammad Zahir on the face and a depiction of his palace on the back, sold for $1,800. The note was described as a “pleasing original, extremely difficult [to find] high denomination.” It was graded by the firm as Extremely Fine to About Uncirculated.

For more information about the auction, visit the firm’s website at www.lynknight.com.