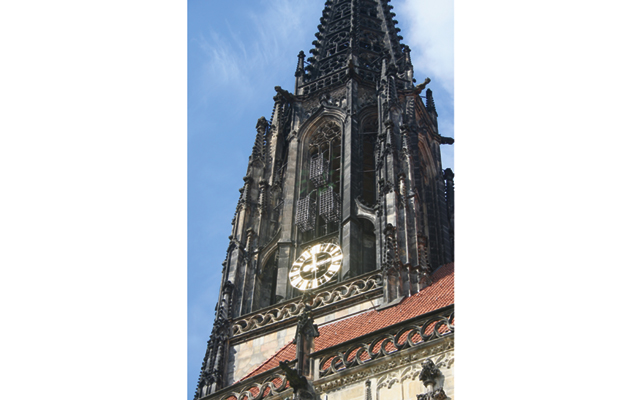 Above the clock on the tower of St. Lambert’s Church in Münster hang three iron cages that held the corpses of executed Anabaptists following the Münster Rebellion. 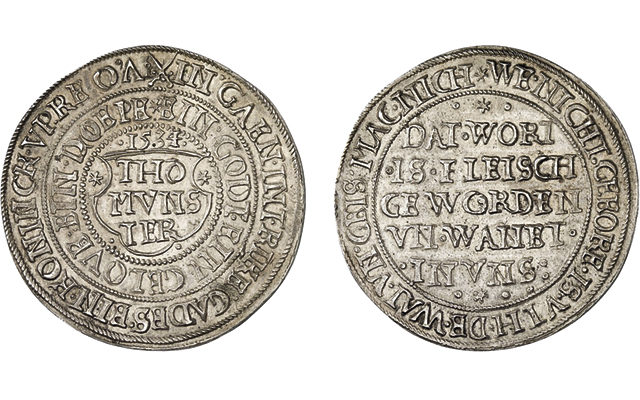 A restrike of the “wiedertäuferthaler,” a silver coin issued during Anabaptist rule over the city of Münster, has a 1,000-euro (about $1,360 U.S.) estimate. 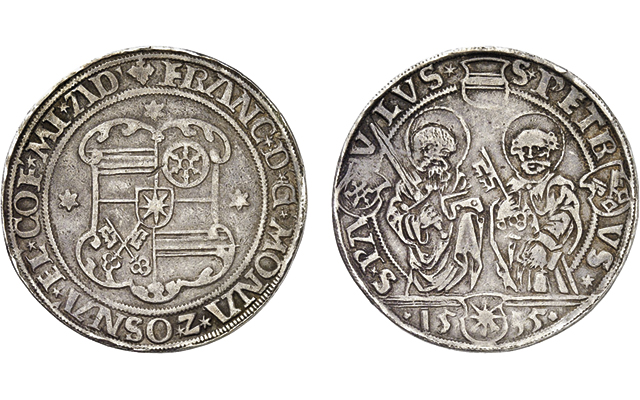 An “extremely rare” silver half-taler from 1535 was issued by Bishop Frederick von Waldeck after the Münster Rebellion, an Anabaptist movement, was quelled. The coin is estimated to realize 10,000 euros (about $13,600 U.S.).

When a religious rebellion occurred in the German town of Münster in 1534, it did not end well for its three leaders.

The Münster Rebellion, which brought a flood of Anabaptists to the city in Westphalia, ultimately ended in the death of the rebellion’s three leaders, their lifeless bodies hung in cages on the tower of St. Lambert’s Church in town.

The rebellion is also remembered today because of a few numismatic artifacts. Two of these pieces highlight Fritz Rudolph Künker’s auction No. 249, scheduled for July 1.

In early 1533, tensions began mounting when the Prince-Bishop of Münster, Franz von Waldeck, established rules allowing Protestants to speak in the Catholic parish churches. In addition to being relatively new (he had just been appointed bishop on June 1, 1532), he was sympathetic to the new ideas.

Instead of defusing already existing tensions, the compromise only inflamed the conflict, as Anabaptists seeking refuge came to town, quickly establishing majority status as Catholics already fleeing the city were followed by moderate Protestants. That cleared the way for the infamous proto-socialist Anabaptist Commune, where polygamy was introduced. The Anabaptists even burned down the city archive, according to a representative of the auction house.

In an effort to regain control, Bishop von Waldeck besieged the city. As the auction house summarized the history: “It was one thing to tolerate the reformation as long as the churchly propriety and, most of all, the state’s power were not affected,” but “an independent commune beyond state control was something that even a politician favorable towards Protestantism could not accept.”

The end of the Anabaptists was imminent.

The siege continued until June 24, 1535, when the members of the commune died in “a bloodbath,” as the auction firm describes the event.

The leaders of the commune, Jan of Leiden, Bernd Krechting and Bernd Knipperdolling, were executed in January of 1536, literally burned and tortured in a particularly gruesome public display. Their remains were suspended from the steeple of St. Lambert’s Church in iron cages, so that “they might serve to all restless spirits as a warning and a scare and so prevent them from trying and daring to do something of the kind in the future,” according to the auction firm.

Two silver coins in the Künker auction, from the Dieter Braun Collection of Coins from Münster and Westphalia, relate to the saga.

The rarer piece, a 1535 half-taler, was issued by Bishop von Waldeck after the city was recaptured. Coins in both taler and half-taler denominations were issued, showing the main saints of Münster, Peter and Paul.

The other coin, a 1534-dated “wiedertäuferthaler,” is a restrike of a coin issued by the Anabaptists during the siege. The Anabaptists banned images, so the coin shows an inscription of John 1:14, which references a central tenet of the Anabaptists’ beliefs, baptism.

The scripture fills both sides of the coin. Few original examples of the piece exist, but the coins were restruck several times, and this example was likely made for visitors to a diplomatic congress from 1645 to 1648, according to the auction firm.