Trade dollars high on the list of most counterfeited coins 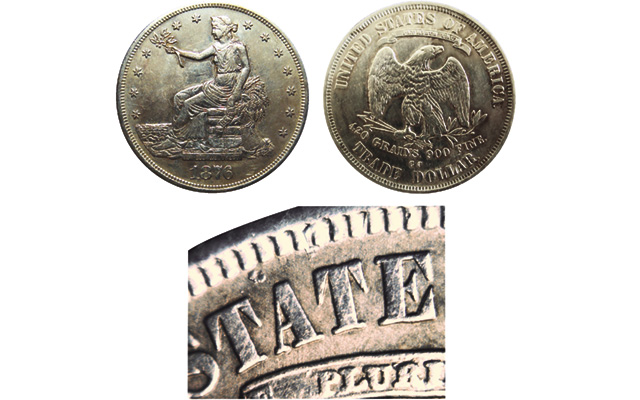 Counterfeit 1876-CC Trade dollar exhibits a raised lump above the second T and between T and A in STATES. The obverse and reverse were paired from two different design types.

The U.S. Trade dollar series remains one of the most heavily counterfeited among U.S. coins.

When large numbers of fake Trade dollars first showed up many years ago, examples with the Carson City Mint mark were the most prevalent, and this trend remains unchanged. Judging by what I have encountered in the ANACS grading room during the past year, two or three counterfeit Carson City Mint Trade dollars exist for every genuine example.

The fake 1876-CC Trade dollar shown here is well-made and could easily fool many dealers and collectors. The finer details of the design are reasonably sharp, the weight and composition are accurate, and the overall appearance is quite deceiving.

Like many Chinese fakes, this one has the sharpness of a piece in About Uncirculated condition, with dull surfaces that at first glance appear to be lightly cleaned.

A close inspection of this fake produced a few helpful diagnostics. An oddly shaped raised lump is in the fields above the TA in STATES, and another raised lump is above the second T in STATES, touching a dentil. The letters in E PLURIBUS UNUM are a bit weak and rounded, and some light tool marks (raised lines on a fake coin caused by corrective tooling of the fake die) appear on the digits in the date.

Many fake Trade dollars can be detected by an incorrect combination of design types. During 1875 and 1876, the design of the Trade dollar was changed slightly, resulting in a Type 1 and Type 2 for both the obverse and reverse. When mixing and matching fake dies to produce as many different date/Mint mark combinations as possible, counterfeiters from China sometimes pair die types that were not paired on any genuine piece. For a complete description of the differences, as well as a list of all the combinations produced by the U.S. Mints, refer to Silver Dollars & Trade Dollars of the United States.

Unfortunately, this fake copies a Type 1 obverse and a Type 2 reverse, the most common die pairing for genuine 1876-CC Trade dollars, so this information doesn’t help detect this particular fake, but ANACS has seen hundreds of other fake Trade dollars that can be confirmed using this method.