There's a Manduca sexta right on a Georgia obsolete note! 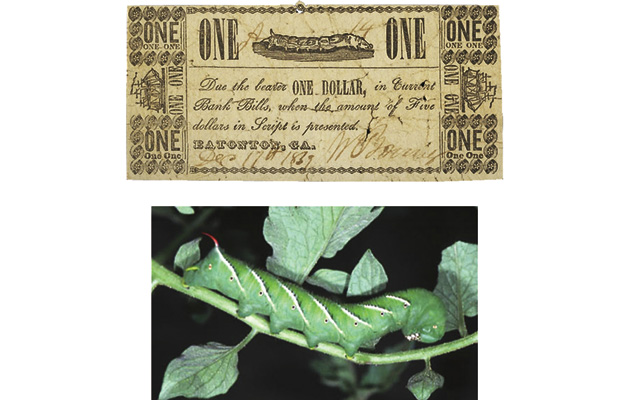 The Manduca sexta, better known as the tobacco honrworm, in all its glory on an 1839 $1 obsolete note from Eatonton, Georgia, top, and in color, bottom.

Obsolete notes have always been a fertile field for people who enjoy collecting topically.

Rather than collect every note from a geographic area, some of us enjoy collecting notes and scrip that depict trains or steamboats or Indians or eagles, for example. Others look for more exotic subject matter that is either unique or odd.

I’ve always been fascinated by some of the things that have appeared on bank notes through the years.

Santa Claus has made appearances on a number of obsolete bank notes.

Frogs engaged in combat appear on a Windham Bank (Conn.) $1 note, commemorating an unusual natural phenomenon that occurred in 1754, convincing the local populace that all of the racket made by thousands of frogs fighting for space in a greatly diminished pond meant that they were under attack by Indians!

Then there’s the scrip note from Fish House, N.Y., that has a prominent vignette of a house superimposed on the side of a fish. But what in the world does the Manduca sexta, better known as the tobacco hornworm, have to do with bank notes?

While looking through the recent Florida United Numismatists Heritage Signature Auction lots, I came across lot 18308. I normally do not actively collect notes from Georgia, a state with many interesting and beautiful issues, but this lot brought me up short.

There, in all of its disgusting glory on an 1839 $1 note from Eatonton, Ga., was a tobacco hornworm! I think that the cataloger was probably correct in his assessment that this is undoubtedly the only use of the tobacco hornworm as the subject of a bank note vignette in the United States; probably the world.

Why this rather disgusting ravager of crops would be selected for such an honor escapes me. Perhaps it commemorates some local infestation or was simply felt to be distinctive and likely to cause the locals to talk about the issuer.

One of the beauties of obsolete paper money is that we’ll probably never know. It is likely to remain one of those weird “what were they thinking” stories.

And it’s those kind of stories that people like me enjoy telling people like you as part of the collecting experience.

I’d love to hear from you if you have any insight into this particular note.