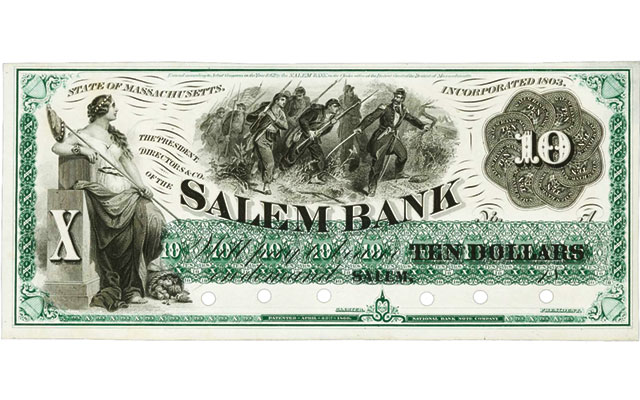 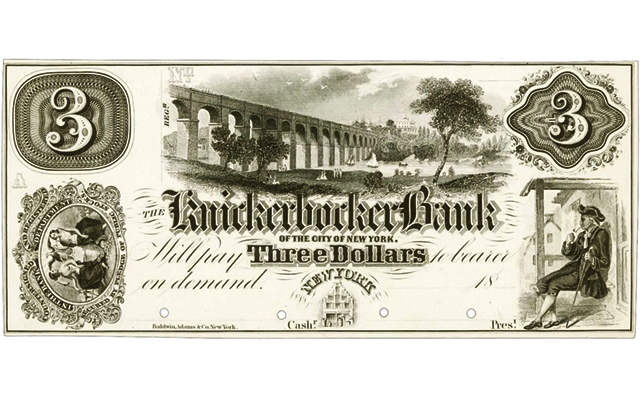 A $3 proof for the Knickerbocker Bank of the City of New York.

The following is the second of a three-part Coin World series about collecting obsolete notes following the tenacious yet patient approach exhibited by the late Peter Mayer, prepared by Michele Orzano for the February 2015 monthly edition of Coin World.

Read the first and third parts:

The third step is to learn as much about the notes as possible. Mayer took every opportunity to learn about his hobby. He began dealing full time with coins and paper money in the early 1990s and also seriously started collecting obsolete notes.

The Christie’s auction of the American Bank Note Co. Archives of obsolete proofs conducted in September 1990 provided collectors with many never-before-seen examples. Mayer acquired many proofs from that sale.

ABNCo. was the nation’s foremost printer of paper money in the 1800s. It was formed in 1858 by a consolidation of seven leading bank note engravers and printers.

Mayer kept track of who outbid him for notes at the Christie’s ABNCo. auction and later acquired the notes from other collectors.

Mayer was one of only three collectors who attended all 18 auction sessions of the Herb and Martha Schingoethe Collection of 30,000 obsolete notes.

Smythe & Co. began the auctions in 2004, and sale of the collection was finally completed in 2009 by Spink of London after Spink acquired Smythe in 2008.

Many rarities surfaced in the Schingoethe auctions. Many of the notes traced their history back to the 1990 Christie’s sale, but there were many new discoveries.

The John J. Ford Jr. Collection, sold by Stack’s and then Stack’s Bowers Galleries in two dozen auctions from 2003 through 2013, also contained many obsolete notes.

Mayer’s continual research always pointed him to the source of the notes he was interested in acquiring.

Attend such auctions in person whenever possible. Nothing beats seeing and handling a note in person. Even if a collector believes particular items are financially out of reach, there is much knowledge to gain about what is available by just attending such auctions and examining the notes.