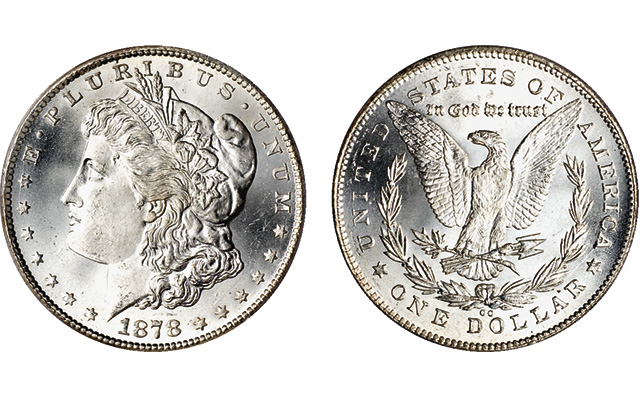 A romantic, historical, and very affordable 1878-CC Morgan silver dollar. Nearly the entire production — more than 2 million coins — went into storage vaults, and later was shipped to the Treasury in Washington.

Carson City Mint coins today are wildly popular, including Morgan dollars, first struck in 1878. Coins of this design were first struck at the Philadelphia Mint on March 11.

The Carson City Mint had made preparations. By March 20, it had 600,000 planchets ready for stamping the coin there. However, the Philadelphia Mint was in the midst of making changes to the design, and coinage dies were not shipped to the Carson City facility by the expected time. Finally, on April 16, a shipment of 10 die pairs and six collars arrived. The Carson City Mint was now ready for coinage, which occurred shortly afterward.

By that time, 632,325 planchets were on hand. An “Ajax” coining press, made in Philadelphia by Morgan & Orr and delivered in May 1876 for the coinage of Trade dollars, could turn out a cascade of 30,000 silver dollars per day according to one account. More realistically, the press could strike about 90 coins a minute, or slightly over 50,000 in a 10-hour day.

The original Morgan & Orr press delivered for Trade dollar coinage in 1873 also stood ready, as did another press received in 1875. By the end of 1878, the presses had minted 2,212,000 Morgan dollars.

Having collected hundreds of different newspaper and magazine accounts relating to new coin designs — dating from the first Flowing Hair, Chain, AMERI. cents of March 1793 and continuing through the 20th century, I note that nearly every coin launch has resulted in unfavorable reviews. Indeed, until the 1907 Saint-Gaudens, Roman Numerals $20 gold double eagles were released in December of 1907, I have found not a single new design that was widely acclaimed. We may dearly love Flowing Hair, Draped Bust, Capped Bust, Seated Liberty, Barber, and other coins today, but when they were in use each of these was nearly uniformly disparaged in print, and even numismatic mentions were not kind.

And so it was with our dear 1878-CC Morgan dollar. The Carson City Morning Appeal, April 17, 1878, stated that “great disgust was expressed” with the appearance of the coins. Further:

“All that has been said as to the wretched workmanship of the Philadelphia dollar will be equally true of the Carson dollar, and it can’t be helped. The die represents the same wide, flat, pelican-bat of the wilderness, and will show up all the defects of the coin. The C.C. in the die is very indistinct, and looks as if it would turn out two periods. We wish it may, and that the inartistic appearance of the coin will lead the government to employ a new designer and give us a new die, dollar, and deal. The United States ought to be ashamed to issue such a piece of workmanship, and at least should allow a small discount on the face of the thing.”

There was absolutely no need in commerce for 2 million plus silver dollars at the time. They were struck under the Bland-Allison Act of Feb. 28 of that year, in which Western mining interests persuaded Uncle Sam to buy 2 million to 4 million ounces of silver each month to prop up the falling market price.

Nearly all of the 1878-CC Morgan dollars were put into storage vaults. After the Carson City Mint closed they were shipped to the Treasury Building in Washington. Probably 100,000 or more of these were paid out at face value to interested numismatists in the 1950s. I recall handling multiple 1,000-coin bags when the wholesale price was about $2 per coin. When the Treasury stopped paying out coins in March 1964, 60,993 1878-CC dollars remained in Treasury inventory.

These were sold by the General Services Administration some years later. I estimate that 200,000 or so Mint State coins exist today — making them very affordable.