Sons of Liberty mini-series misses the mark in Colonial coins 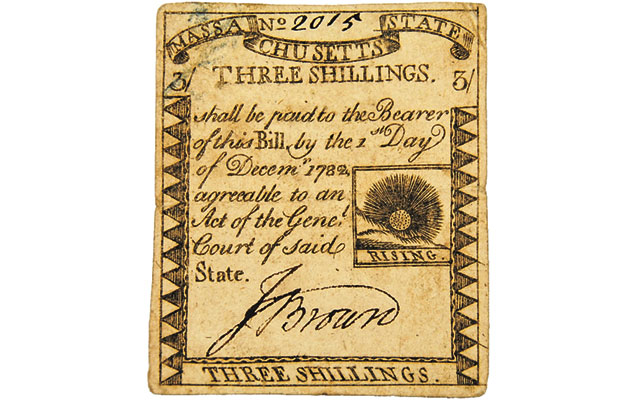 Paul Revere’s shop sign in History Channel’s Sons of Liberty depicts the rising sun vignette Revere engraved for the 1779 Massachusetts issue of paper money. The face of an example is shown.

Colonial numismatic content on television is so rare that any chance to peek at a Colonial coin in prime time should be a treat.

Even if Samuel Adams can’t be cast as a portly 40-something and if Gen. Thomas Gage can’t be depicted as a relatively friendly and politically pro-American functionary, couldn’t they get the coins and paper money right?

The rebel group “Sons of Liberty” uses a coin as their secretive membership pass, which looks like a modern silver round combining the obverse of a “Buffalo nickel” and the reverse of the Nova Constellatio and Vermont coppers.

Aside from the unlikelihood that large silver coins would be handed out freely to a band of working-class ruffians, using a design from 1913 depicting a resident of the western United States is a bit suspect. The producers could have made a medal that looks like the only existing description of a Sons of Liberty membership medal.

That description is said to have been written in 1850, but not published until 1874. Col. John Russell, whose father was a member of the Sons of Liberty, said, “On public occasions each member wore suspended from his neck a medal, on one side of which was the figure of a stalwart arm, grasping in its hand a pole surmounted with a Cap of Liberty, and surrounded by the words, ‘Sons of Liberty.’ On the reverse was the emblem of the Liberty Tree. One of these medals I once had in my possession, with the initials of my father’s name, W. R., engraved thereon, but it was many years ago irrecoverably lost.”

Given that so many high profile men were in the Sons of Liberty and yet not a single example of this medal survives, most historians view this account as a fable.

More accurate, though still imperfect, is the image shown on Paul Revere’s sign. Trade signs were decorative and iconic in Colonial America, usually depicting the type of object made or sold. Paul Revere’s sign likely would have shown something like a tankard, a popular item to be acquired at a silversmith’s shop. On the show, his sign shows the Rising Sun vignette Revere engraved for the face of the 1779 Massachusetts notes, correctly rendered, if about a decade too early.

If you watched and saw other numismatic references I missed, email me.