Selling the coins of the SS Republic 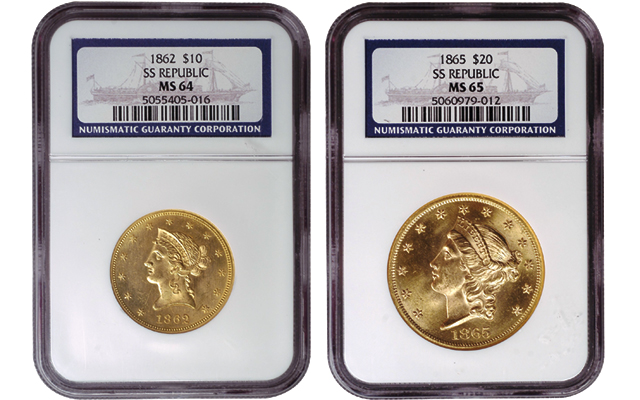 Among the highlights of the first SS Republic coins offered at public auction were this 1862 Coronet $10 eagle, which had an original mintage of 10,995 pieces, and this 1865 Coronet double eagle, graded Mint State 65. Both coins appeared in NGC slabs with the SS Republic pedigree.

As with the SS Central America coins, the SS Republic coins were marketed to collectors after being conserved. Numismatic Conservation Services conserved the coins, with Numismatic Guaranty Corp. grading them. Some of the coins received a “Shipwreck Effect” designation that, Coin World reported, allowed NGC to “accurately describe the condition of a coin by noting surface disturbance that results from its preservation history.” Many of the first coins offered with this designation were the New Orleans Mint Seated Liberty half dollars from the Republic.

The first public offering of coins salvaged from the shipwreck of the SS Republic were the silver half dollars, sold during a televised, 24-hour sales marathon on May 15, 2004, on the “Coin Vault” show on the Shop At Home cable network.

These first coins were packaged in a hardwood display case with an engraved SS Republic identification plate affixed to the cover. Shipments were also accompanied by an illustrated booklet on the history of the shipwreck, a digital video disk of a one-hour National Geographic Society television program on the wreck and recovery effort, and a certificate of authenticity.

The first public auction of coins from the Republic was conducted by Bowers and Merena in April 2005 — gold $10 eagles and $20 double eagles.

Steve Deeds, then president of Bowers and Merena, cited several coins in the auction as being especially noteworthy:

One was an 1862 Coronet $10 eagle, which had an original mintage of 10,995 pieces. Deed noted that survivors up to that point had been mainly Very Fine to Extremely Fine grade. NGC has certified this one Mint State 64 grade, putting it among the finest known examples, Deeds noted in 2005. The coin realized $41,975 including the 15 percent buyer’s fee.

Deeds also cited an 1865 Coronet double eagle as a highlight in the auction. “An underrated rarity in Mint State, the 1865 was probably unknown in gem condition prior to the discovery of the SS Republic shipwreck,” Deeds said. “This important coin [graded MS-65 by NGC] is undoubtedly the finest known example of this Philadelphia Mint issue currently available to collectors.” The coin realized $66,125 with the buyer’s fee.

Additional coins were released gradually through private treaty transactions, with Odyssey Marine officials seeking to avoid overwhelming the marketplace with too many coins at one time. Today, they continue to appear pedigreed in the marketplace.

If it were not for recovery of vast treasures from the SS Central America and SS Republic, both vessels might have vanished from the collective memory of Americans, unlike the Titanic. Today, however, collectors can own pieces of history — the coins and bars from two now legendary ships.