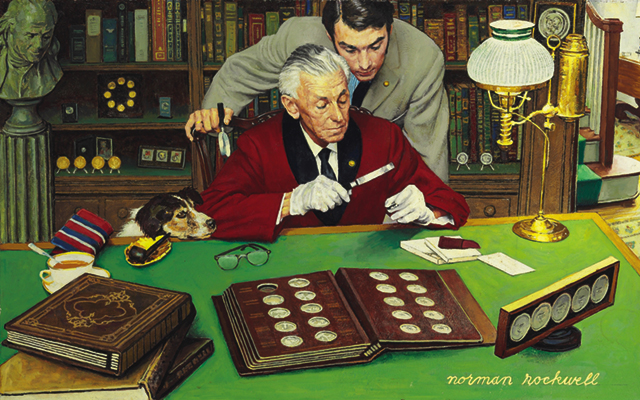 Norman Rockwell’s The Collector, painted in 1971 as part of a commission from The Franklin Mint, is set to be offered at Christie’s May 22, 2014, American Art auction. It carries an estimate of $700,000 to $1 million.

To those who favor traditional, realist painting, Norman Rockwell is the quintessential 20th century American painter.

He’s best known for creating more than 800 magazine covers, most notably for The Saturday Evening Post. His works are among the most expensive American art at auction and over the past several decades he has transcended the illustration art category. Christie’s calls him “perhaps the greatest visual mass communicator of the twentieth century” and his images of American life speak to a global audience today.

In 1970, The Franklin Mint, a private mint founded in 1964 that was active in the production of medals, ingots and various collectibles, commissioned Rockwell to create a series of works to promote the company.

The best-known image from the commission, The Collector, is set to be offered at Christie’s May 22 American Art auction in New York City. The 1971 painting, which measures 30 by 48 inches, carries an estimate of $700,000 to $1 million.

In the essay accompanying the lot, Christie’s relates the popular imagery of Rockwell with The Franklin Mint in that both tried to bring art to the masses. Christie’s writes, “The interests of Rockwell and The [Franklin] Mint, both veritable American ‘brands,’ were aligned and the resulting prints and collectibles represented a successful and lucrative partnership.”

The commission initially called for Rockwell to create drawings that could be made into collectible plates, medals and figures. Rockwell executed 80 sketches between 1970 and 1975 for the project, and The Collector was one of two oil paintings produced as part of the commission.

The image was reproduced in a limited edition series of lithographs for The Franklin Mint Collectors Society. Today, these lithographs are frequently seen in online auctions at the $30 to $50 level.

It is well known that Rockwell worked from photographs and models, yet utilized substantial creative liberties in composing his paintings. For example, a bust of the firm’s namesake, Benjamin Franklin overlooks the scene and Rockwell may have adapted the model bust by Jean-Antoine Houdon to tilt downward.

Christie’s relates this bust to a souvenir to that Rockwell brought back from a 1932 trip to Paris, “a six inch reproduction of Benjamin Franklin by Houdon.”

A visual unity results from Rockwell’s adaptation of Franklin’s bust tilting downward: the sculpture, two men and a dog each study the collectibles on the table, together, in a shared experience.

It’s classic Norman Rockwell, as described by Christie’s. “In The Collector, an enthusiast intently studies a coin in hand. He wears white gloves to delicately handle his prized objects, substituting his glasses for a magnifying glass as he makes a closer inspection. He appears to take pride in his collecting, dressed sharply for the examination. A younger man, and a dog are keen apprentices. The scene appears to be in an inviting home study, where the collector enjoys a hot drink with his pipe. The light from the desk lamp casts a warm yellow light on the scene.”

The formal composition and traditional setting of Rockwell’s 1971 painting solidifies the activity of coin collecting as a wholesome, leisurely and engaging activity. Today, more than four decades later, the image continues its relevance to collectors.