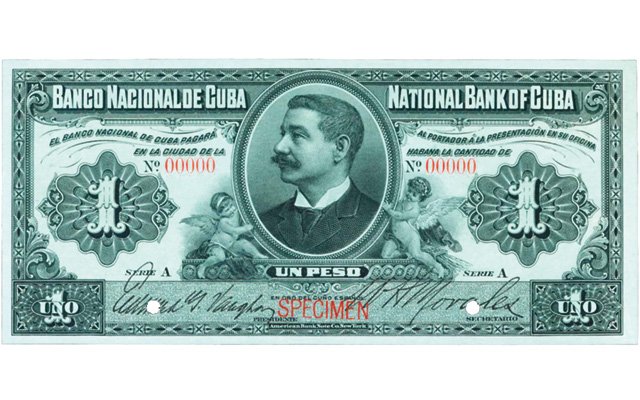 A rare, 1905-era 1-peso specimen note for the National Bank of Cuba will be offered in the Jan. 12 Stack's Bowers Galleries auction of world notes during the New York International Numismatic Convention.

A National Bank of Cuba 1-peso specimen note will be offered in the Jan. 12 auction to be conducted by Stack’s Bowers Galleries during the New York International Numismatic Convention.

The circa-1905 note has SPECIMEN overprinted at the bottom, solid zeros in the serial number, denoting a specimen note, and a punch cancellation at the signatures.

The note was graded as Gem Uncirculated 66, Exceptional Paper Quality by Paper Money Guaranty. It has an estimate of $4,000 to $6,000.

Also to be offered is a rare 5-Palestine-pound note issued by Palestine Currency Board and dated Sept. 1, 1927. According to the catalog description, the note is considered to be “one of roughly 10 known pieces for the date and denomination.”

The note was graded by PMG as Very Fine 20 with a catalog notation of a “tiny spot of ink at the lower right margin.”