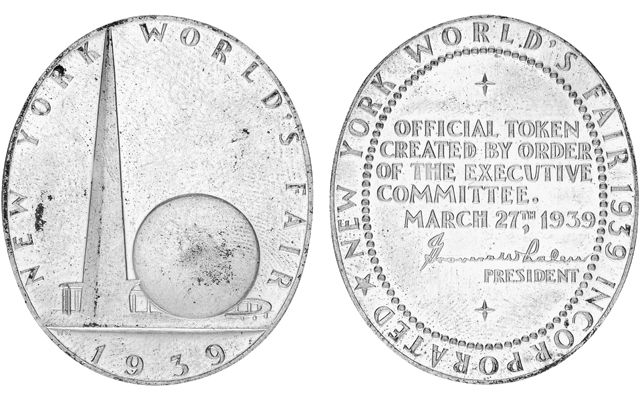 Henry Kreis used the Trylon and Perisphere and the facsimile signature of New York’s official “greeter,” Grover C. Whalen, on this oval silver $1 token distributed at the New York expo. 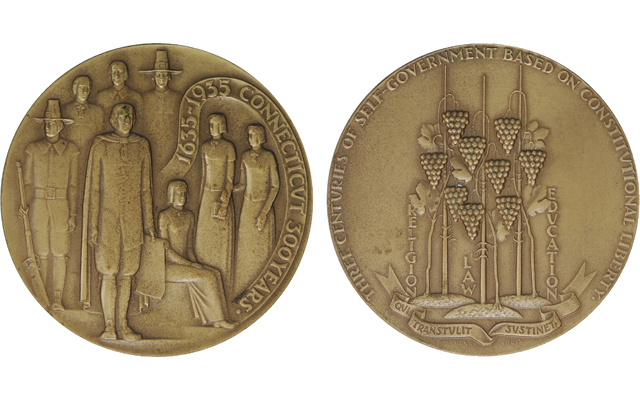 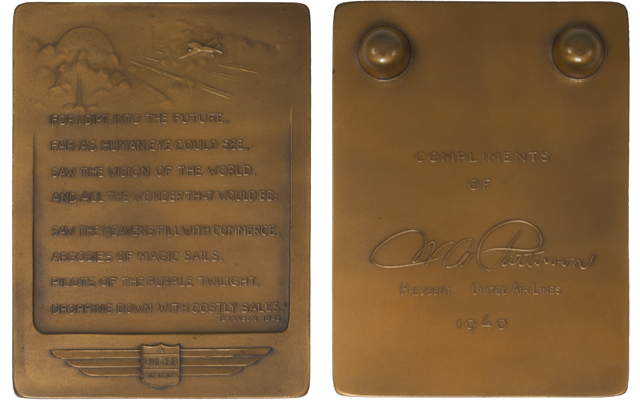 Editor’s note: In his July monthly Coin World cover feature, noted medal expert David T. Alexander traces the path of the Art Nouveau and Art Deco design movements through the beautiful designs of European and American art medals. This is the last of a series of articles from this feature that will appear online at CoinWorld.com.

The New York World’s Fair of 1939 to 1940 produced fewer high quality medals than most of its predecessors. The fair’s emblem was the Trylon and Perisphere, a tall pointed obelisk and a round globe connected by a sweeping elevated roadway. One of the most handsome depictions of this modernistic symbol appears on the official New York World’s Fair token dated 1939.

This silver oval measures 34- by 39-millimeters, with reeded edge, designed by Henry C. Kreis. As much a token as a medal, this handsome piece was struck by Medallic Art Co. and sold for $1 each at the Manufacturers Trust Co. exhibit. The obverse depicts the Trylon and Perisphere, while the reverse bears the facsimile signature of Executive Committee President Grover Whalen.

The face and official greeter of New York during the delirious excitement and ticker-tape parades of the Roaring Twenties, Whalen enjoyed his last hurrah as World War II inexorably bore down upon and swept away the faltering fair.

Artist Kreis had introduced Art Deco to U.S. commemorative coinage with his 1935 Connecticut Tercentenary and 1936 Bridgeport half dollars. A more forceful example of his work is the 76.3-millimeter medal for the same Connecticut Tercentenary, struck by Medallic Art Co. Its stark obverse bears five male and three female figures standing or sitting bolt upright holding Charter, musket and Bible, their angularity broken by a sinuous ribbon at right inscribed 1635-1935 CONNECTICUT 300 YEARS.

The reverse presents three grape vines on poles, with the vertical inscription RELIGION, LAW, EDUCATION between the supporting poles, all within a legend hailing THREE CENTURIES OF SELF-GOVERNMENT BASED ON CONSTITUTIONAL LAW.

Art Deco would falter and then disappear in the firestorms of World War II, just as its predecessor Art Nouveau had vanished in the previous war. One of the last trailing glories of the movement in American medallic art was the 1940 plaquette struck by Whitehead and Hoag for the aviation management pioneer and United Airlines president, W.A. Patterson.

This 100- by 76-millimeter plaquette rests on two half-ball feet and bears a serene view of a modern two-engine monoplane soaring toward a radiant sun over cumulus clouds, its rays detached from the orb and seeming to float in limitless space. At base is the winged United Airlines emblem.

The eight-line sans-serif inscription between these elements is an excerpt from Alfred Lord Tennyson’s prophetic poem of 1842, “Locksley Hall”: “For I dipt into the future, far as human eye could see, saw the vision of the world, and all the wonder that would be. Saw the heavens fill with commerce, argosies of magic sails, pilots of the purple twilight, dropping down with costly bales.”

Elsewhere in his poem, Tennyson foresaw the aerial warfare and bombing that transformed the face of war in 1939 to 1945. Art Deco vanished, its place taken by an increasingly anarchic array of modernist forms that would rule the medal field and especially the pivotal Paris Mint in the decades to come.

Keep up with Coin World online: