Monkey in India decided to be a philanthropist for a day 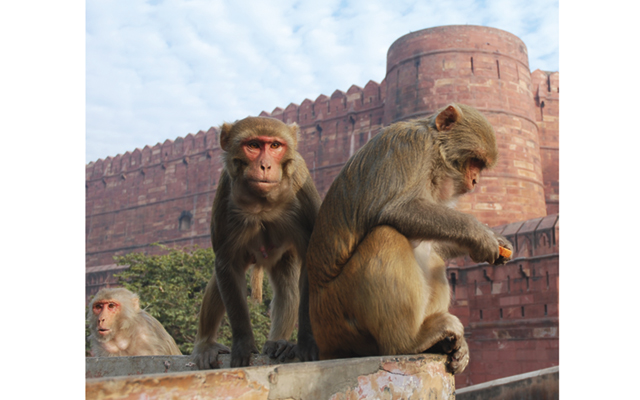 Macaque monkeys sit near the Agra Fort. The monkeys are considered sacred in India and are often fed. In recent years they have become bolder, according to officials.

An Indian macaque monkey decided to become a philanthropist with someone’s money as he showered Indian rupee notes on a crowd in the northern Indian state of Himachal Pradesh, according to a Sept. 2 story posted on BBC.com.

Macaque monkeys are considered sacred by Hindus, who often feed them.

“The monkey had entered a house to look for food, but when it did not find anything to eat, it took the money. ...

“The cash-dispensing simian was first spotted sitting on a tin roof with a bundle of currency notes before it playfully started throwing them down one-by-one.

“As people began collecting notes of various denominations, the monkey moved on to a tree.

“But as it continued to distribute money, many people rushed there to pick up the falling notes.”

Some 300,000 monkeys live in the state and Shimla has long been a haven for the animals. But in recent years, the animals have been coming increasingly in conflict with humans, destroying crops, attacking people for food and biting children.