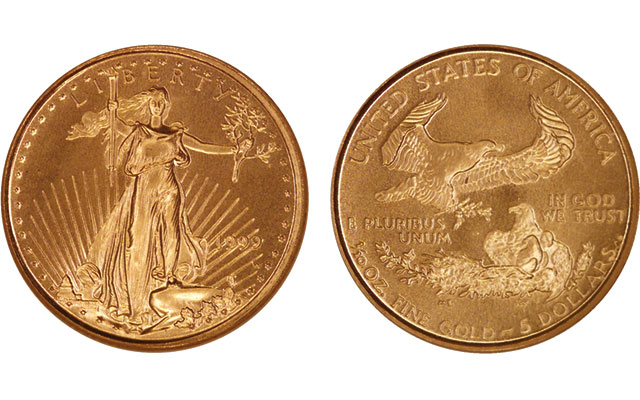 The 1999-W tenth-ounce gold American Eagle is one of just two bullion issues with examples that bear a Mint mark.

Bullion coins are very purposefully struck without Mint marks. The simple explanation for this is that bullion coins are meant to be bought and sold based on the intrinsic metal value, not as numismatic collectibles, so a Mint mark isn’t strictly necessary.

Since the U.S. Mint is not a precious metals dealer, it can’t sell bullion coins to the public. Instead, it produces bullion coins and then distributes them through a network of “Authorized Purchasers.”

But the Mint can sell collectibles. Since the beginning of American Eagle coinage in 1986, the Mint has sold Proof issues directly to collectors. To distinguish these numismatic collectibles, they are given Mint marks. In 2006, when Uncirculated versions for direct sale to collectors were introduced, they too had Mint marks.

Of course, the absence of Mint marks has another benefit. It allows the Mint to shift production from one facility to another without causing any supply disruptions because the coins themselves are identical. For example, from 2011 to 2014, American Eagle silver bullion coins were made at the San Francisco and West Point Mints. Only their exterior packaging made them distinguishable from one another. For this year, the Philadelphia Mint struck American Eagle silver bullion coins for the first time, but they were distributed in West Point Mint packaging alongside West Point Mint coins, with no distinguishing features!

Despite the intentions of the U.S. Mint, two American Eagle bullion coins do have W Mint marks. They were produced by mistake!

In 1999, a small number of tenth-ounce and quarter-ounce gold American Eagle bullion coins were struck at the West Point Mint with W Mint marks. They were inadvertently struck using dies intended for the production of Proof coinage, which therefore had a Mint mark. The dies were never polished and were used to strike the bullion coins instead. The coins were distributed as bullion coins in tubes alongside regular non-Mint marked examples.

Their exact mintage is unknown, but it is estimated that 14,500 of these American Eagle tenth-ounce gold coins were coined, and about 6,000 examples of the quarter-ounce coin.

While a number of coins are struck with inadvertently omitted Mint marks, these coins are the only varieties to include one accidentally. They are very popular with collectors today and widely collected as a standard component of the gold American Eagle series.