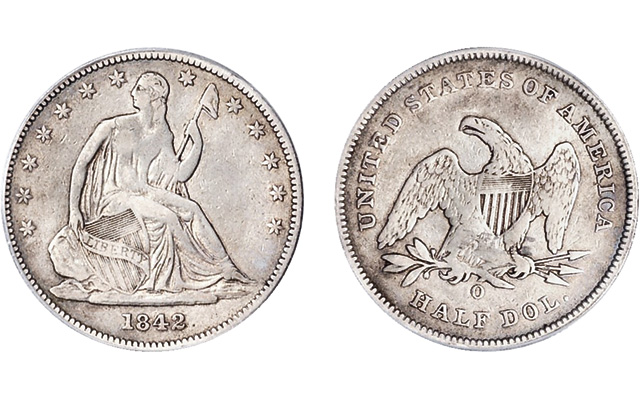 A rare and extremely desirable Very Fine 20 1842-O Seated Liberty, Small Letters half dollar that saw many years of circulation.

If you are making some New Year’s resolutions in numismatics, I have two to suggest.

One amazing aspect of both specialties — that is, amazing to newcomers to the hobby — is that 99 percent of the emphasis is on worn coins.

Of course, super gems are appreciated and auction records gain notice, but nearly all of the articles and comments in print have to do with collecting “nice” coins that have done their duty in circulation. This brings me back to the first New Year’s resolution.

Suppose you decide to collect a set of Barber half dollars. All dates and Mint marks from 1892 to 1915 are readily available.

If you opt to build a set in Fine 12 grade, this will take a year or more to do if you carefully select each coin. None will cost more than a few hundred dollars.

If you opt for Mint State 65, be prepared to spend hundreds of thousands of dollars for a set with nice appeal. Of course, an MS-65 set is very desirable, but not many can afford this.

Similarly, nice collections of Seated Liberty half dimes, dimes, quarter dollars, and half dollars in worn grades are stimulating to collect, and most varieties are inexpensive. All Seated Liberty dollars, however, are expensive in all grades.

As to MS-65 coins, no one has ever built even close to a complete collection of any denomination among the Seated Liberty and Barber coinage.

There is another benefit to collecting worn coins: Your interest will be maintained for a much longer time, as you will not be concentrating on only high grades and spending a lot of money!

My second recommendation for a New Year’s resolution: Spend some money on books. Just about anyone will spend $500 on a rare coin, but spending $500 on books seems to be strange. The fact is that with a reference book in hand, the enjoyment of any coin is not only enhanced, it is multiplied.