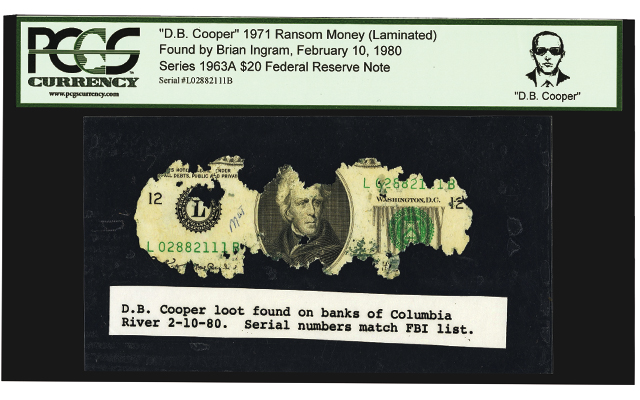 A special "D.B. Cooper" insert depicts a 1971 FBI artist's sketch of the skyjacker. PCGS Currency created the insert to use for certifying $20 notes from the ransom money discovered in 1980.

Through the years Coin World has reported on many coin hoards that have been discovered around the world. However, money treasures are not always limited to coins.

Reports of people finding cash stuffed behind plaster walls or tucked away under the eaves in an old building or even buried in the ground come along on a seemingly regular basis.

But one story of “found” cash so captured the public’s excitement that it has become part of the shared American experience.

This paper money “treasure” story involves a ransom paid in connection with a skyjacking more than 40 years ago.

The name “D.B. Cooper” entered the American vocabulary shortly after a skyjacking (hijacking of an aircraft) on Nov. 24, 1971.

That day, a man carrying a black attaché case approached the Northwest Orient Airlines ticket counter at Portland International Airport in Portland, Ore., and bought a one-way ticket to Seattle.

He wore a black lightweight raincoat, loafers, a dark suit, a neatly pressed white collared shirt, a black necktie, and a mother of pearl tie pin.

Airline officials authorized payment of the ransom and FBI agents assembled the 10,000 unmarked $20 Federal Reserve notes, many of them Series 1969C with serial numbers beginning with the letter “L” indicating issuance by the Federal Reserve Bank of San Francisco.

The plane circled Puget Sound near the Seattle airport for two hours waiting for Cooper’s demand to be met.

The plane eventually landed, and all 36 passengers and two flight attendants left the plane. Four crew members and Cooper stayed on board.

The money and parachutes were delivered and the airplane refueled. Cooper gave the pilot instructions to set a course to Mexico City, with a refuel stop in Reno, Nev.

Several years later, FBI officials said the area where Cooper most likely landed was the drainage area of the Washougal River, south-southeast of the original locations for the searches.

That area was also extensively searched, but nothing turned up at the time. All along, FBI investigators have insisted that Cooper probably did not survive his risky jump.

As part of their investigation, the FBI also distributed lists of the ransom serial numbers to financial institutions, casinos, race tracks, and law enforcement agencies around the world. Rewards were offered and the serial numbers were released to the public.

Check back with CoinWorld.com to keep up with Michele Orzano's feature. Or, better yet, let us alert you when the latest post is up: