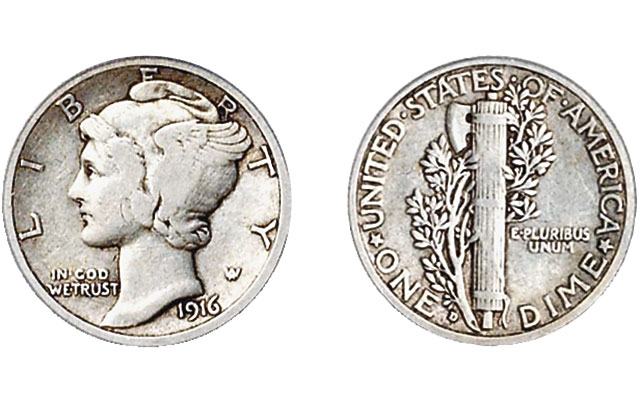 In 1961, you personally had to determine whether the 1916-D Winged Liberty Head dime illustrated above was genuine and determine its grade or condition. Today, you just have to look at the label from the grading service.

If you are a longtime reader of this column, you know that I am a traditionalist.

If you’ve been around since 1961, you have seen the column ever since then, first under the name of “Numismatic Depth Study.” By then, I had been in the hobby since 1952 and dealing since 1953, starting in a small way.

In 1961, my business with James F. Ruddy as my partner announced annual sales of $1 million, the first coin company ever to achieve this level. In 2014, if Stack’s Bowers Galleries sells a single coin for $1 million, there may be applause, but then the auctioneer moves on to another lot.

Numismatics was a hobby, the art and science of collecting coins, tokens, medals and paper money, back then. Today, it is an industry. To me, numismatics is still an art, while to me an industry is a chocolate factory or a deep-pit mine in Arizona.

Before I continue, I love numismatics and 2014 has been very enjoyable. There are huge differences, however.

2014: To deal in rare coins you need coins encapsulated by Professional Coin Grading Service or Numismatic Guaranty Corp., or one or two others. You need a list of prices. You need some capital. That’s it!

1961: To deal in rare coins you needed to know how to grade them. There were no agreed-upon grading standards or services, and one person’s Uncirculated might be another’s nicked-up About Uncirculated.

1961: You needed to know how to identify counterfeits. In one well-known instance, John Ford made the rounds of a large national convention and found that more than 50 percent of the 1916-D Winged Liberty Head dimes on hand had added Mint marks. There were no authentication services.

2014: PCGS and NGC guarantee authenticity. No more fakes except in flea markets and on the Internet.

1961: For prices there were two main sources: Coin World “Trends” single-handedly compiled by dealer Jim Kelly, and A Guide Book of United States Coins, which appeared each July.

2014: If you want to find the price of a common 1881-S Morgan dollar for example, go on the Internet and you can either instantly get some prices or spend all year trying to wade through zillions of listings. Alternatively, you can look in the Guide Book or Coin World “Trends,” now Coin Values, in less than a minute.

1961: If you wanted to buy coins you wrote a lot of letters, traveled to coin shows, or visited your local coin shop. Around this time Chet Krause estimated about 6,000 coin shops dotted America. You needed to look at coins, usually in paper envelopes, and determine the grade on your own. You needed to watch out for fakes. All of this took a bit of time, but many friendships and fine experiences resulted.

2104: In your favorite overstuffed chair with a laptop computer at hand and, for safety, sticking with certified coins, in an afternoon you can build, perhaps, 95 percent of a set of Mint State Morgan dollars or Walking Liberty half dollars, build a gold type set, and get all three 1896 Educational notes. In 1961, this would have taken months to do! Coin shops, while not quite as rare as dodo birds, are few and far between.

If you are typical, quality means nothing. The label on a holder takes care of everything. If the typical 2014 coin buyer wanted to put on a spread of cakes and pastries for visiting guests, the equivalent to numismatics would be to go to a grocery store and buy bags full of frozen items and thaw them out they day they are to be served.

The above said, there are lots of positives — and suppression of counterfeit and instant grading makes it easy for beginners.

Close friendships among collectors and dealers and camaraderie are alive and well in 2014, but you need to look to find them. The secret: It is in niche or specialty collecting. Check out the websites of the Colonial Coin Collectors Club, Early American Coppers, the Liberty Seated Collectors Club and the Numismatic Bibliomania Society, and poke around!