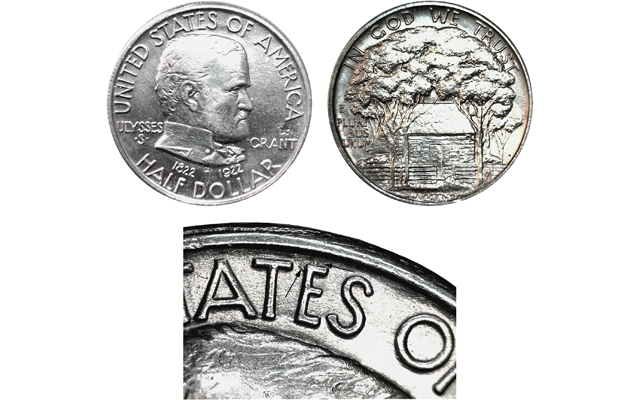 A genuine 1922 Grant, With Star half dollar was used to fabricated molds to cast the counterfeit illustrated. The fake weighs more than a gram less than a genuine example. Extra metal from casting is evident above the E in STATES.

The 1922 Grant, With Star commemorative half dollar is one of the keys to the set.

With a mintage of only 4,256 pieces, it is currently priced in Coin Values at $900 in About Uncirculated 50 condition, making it well worth the effort to counterfeit.

The example illustrated here is the kind of fake that could very easily fool most collectors or dealers, especially at a coin show or flea market.

This piece was first examined by Kat Oviatt, a 10-year veteran of the ANACS authentication and grading team.

Her initial impression was that the coin had been mishandled and polished, which would not be that unusual for a genuine early commemorative coin. Many of the pre-1930 U.S. commemorative half dollars have been whizzed, repaired, cleaned, polished, or otherwise impaired.

Once she took a closer look, more problems were evident, including extra metal around the lettering and some microscopic pitting in the fields.

We have a high-quality digital scale in the ANACS grading room that we use daily, usually for genuine error coins and pre-1600 world coins.

A quick check of the suspect coin’s weight verified our concerns — instead of the normal weight of 12.5 grams for a genuine example, our fake weighed only 11.36 grams, which is considerably outside the tolerance range for a 20th century U.S. coin.

The enlarged image shows the extra metal at the top of the E in STATES, which should give a collector a reason to look closer.

Once the tiny pits in the field are discovered, minor concern gives way to worry.

Unfortunately, very few collectors or dealers have access to an accurate scale at all times when they are looking at coins, and the weight is the most damning diagnostic for this fake.

A genuine 1922 Grant, With Star half dollar was used to produce the casting molds, so all of the basic features of the fake are accurate, including the shape and position of the all-important star above GRANT. The finer details are sharp and crisp, unlike many of the fakes we have been seeing lately. This piece is definitely something to watch out for when purchasing uncertified coins.