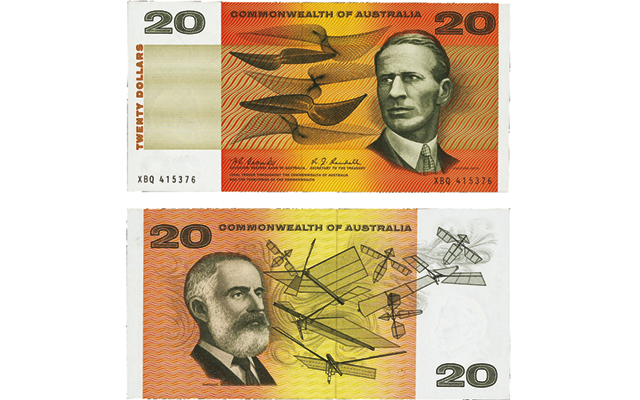 The face of the 1968 $20 Australian notes feature a portrait of World War I veteran pilot and aviation pioneer Sir Charles Kingsford-Smith, while the back design has a portrait of Lawrence Hargrave, another aeronautical pioneer, who is credited with perfecting a type of box kite. 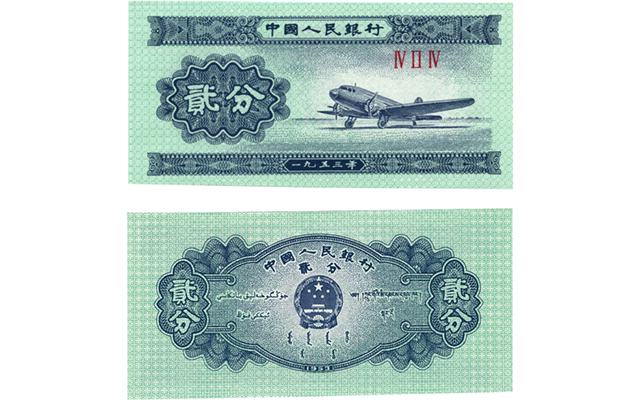 Editor’s note: The following is the first of a three-part Coin World series about collecting paper money featuring airports, airplanes and other forms of air travel, prepared by Michele Orzano for the December 2014 monthly edition of Coin World.

Flying through the skies, climbing above the clouds to where the sun is always shining, has been a dream for many people through the centuries.

Those dreams show up in fairy tales that tell of people flying on rugs or trunks, and even of people themselves soaring through the air without benefit of wings or something to ride.

So it is no surprise that powered flight in all its forms stirs so much excitement in so many people — among them paper money collectors. U.S. and world notes depict powered flight and many of its proponents in several forms.

Let’s take a round-the-world-flight to see what’s available to collect.

The “land down under” is very familiar with powered flight and Australia’s paper money designs have celebrated that fact.

A portrait of World War I veteran pilot and aviation pioneer Sir Charles Kingsford-Smith appears on the face of the 1968 $20 Australian note.

Kingsford-Smith set many world records for flying, including making the first trans-Pacific Ocean flight from the United States to Australia.

In 1935, while he was attempting to break the England to Australia speed record with co-pilot Tommy Pethbridge, their plane is thought to have crashed in the sea off the coast of Burma (now Myanmar). Their bodies were never found.

Lawrence Hargrave, another aeronautical pioneer, is honored on the back design of the 1968 $20 note. He’s credited with perfecting a type of box kite. Versions of his experiments are also included in the note design.

The face of the 1994 $20 notes of Australia shows early pioneer Mary Reibey, but it’s the back design where things take flight. It shows a portrait of the Rev. John Flynn, who offered medical services to isolated communities of Australia, first using camels for transportation but eventually using airplanes.

The creative juices started early for Alberto Santos-Dumont, a Brazilian aviator honored in 1966 with his portrait on the face of the 10,000-cruziero notes of Brazil. His powered box kite, the 14 Bis, is depicted on the back.

He was born in Brazil in 1873, and as a young boy on his family’s coffee plantation he became fascinated with machinery. He did most of his aeronautical studies and experiments in Paris where he had moved at age 18.

He made his first balloon ascent in 1897. After building and flying his own balloons, he moved on to powered dirigibles, becoming a leader in that segment of aviation. In 1905, he turned his attention to heavier-than-air craft, and in 1906 in the 14 Bis, made the first verified heavier-than-air flight in Europe.

China’s reverence for flying dragons may have been the impetus for the nation to consider depictions of flight on its paper money.

The Central Bank of China’s tiny 5-yuan notes from 1942 show an airplane on the back.

A monoplane is depicted on the back of the 25-yuan notes of China issued in 1941 by the Bank of Communications.

Read the rest of the series:

Airplanes, pilots from different eras can be found on notes from around the world