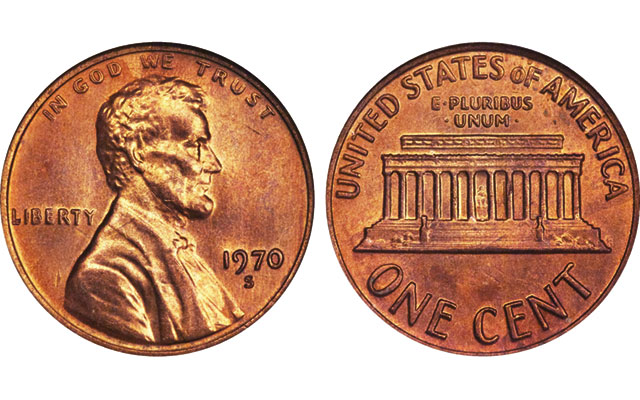 The 1970-S Lincoln, Doubled Die Obverse cent is overshadowed by the 1969-S cent, despite being rarer.

In 2011, when I co-wrote the first edition of 100 Greatest U.S. Modern Coins, the 1969-S Lincoln, Doubled Die Obverse cent was awarded the top ranking. Just a few years before, Internet chat rooms had been set abuzz when the finest known example of this variety was found by a Michigan collector while searching through rolls.

When it came to auction shortly afterward, graded Mint State 64 red, it realized $126,500 — still a record for a Lincoln cent with the Lincoln Memorial reverse.

The 100 Greatest book lists a trio of Lincoln cents from that era with doubled die obverses, including the Proof 1971-S cent and the ever-popular 1972 cent, a “Red Book” variety. Essentially overlooked was the coin that turns this trio into a quartet: The 1970-S Lincoln, Large Date, Doubled Die Obverse cent.

Trades of examples in this condition are so infrequent that it’s hard to pinpoint the precise value. But why is this coin worth less than one-tenth the price of the 1969-S Doubled Die Obverse cent?

While visually the 1970-S cent is an exceptional variety, showing clear separation between hub impression on the LIBERTY and IN GOD WE TRUST, I do believe it is ever-so-slightly less dramatic than the 1969-S coin. In its favor, it is twice as rare. To date, Numismatic Guaranty Corp. and Professional Coin Grading Service have graded only 26 examples combined! For the 1969-S cent, the total population is 55 pieces.

In the end, the auction catalog itself may include the answer. Quoting the 2009 Cherrypickers’ Guide to Rare Die Varieties, it reads as follows: “To this point, fewer examples are known than the previous listing, the 1969-S. However, this variety has not received the publicity as the previous, thus the lower values.”

When it was first discovered in mid-1970, the Secret Service declared the 1969-S cent to be the work of counterfeiters, seizing known examples. Discovering their error, they declared the coin genuine and returned the coins. From that day, through the discovery in Michigan, the 1969-S cent has been the more storied and coveted coin.

Both varieties are rare. However, rarity is only half the story — or one-tenth, in this case. Desirability is the more important factor in determining value.