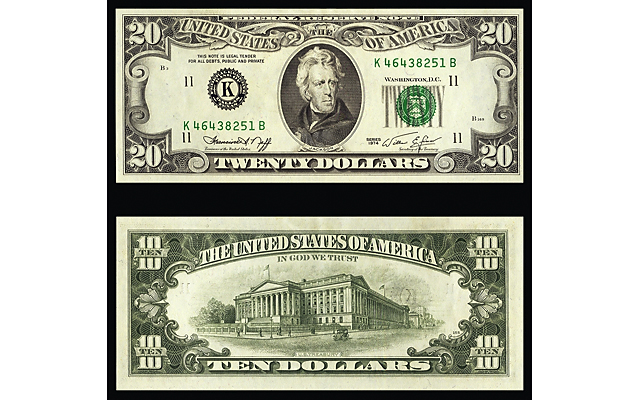 One of the most desirable types of error notes is a double-denomination error. This example of a $20 face and $10 back Series 1974 Federal Reserve note sold for $28,200 in Heritage Auctions' Currency Platinum Night sale Aug. 6.

A double-denomination note — known as the “king of errors” — sold for $28,200 (including the buyer’s fee) during the Currency Platinum Night Auction by Heritage Auctions Aug. 6 in Rosemont, Ill.

The error note, which has a Series 1974 $20 Federal Reserve note face design and a $10 FRN back design, was offered during Heritage’s auction at the American Numismatic Association World’s Fair of Money.

The note was graded Choice About New 58 Premium Paper Quality by PCGS Currency. The note “has been softly folded once down the center,” according to the catalog description.

Previously, the last $20/$10 double-denomination note the firm sold was graded 64 Exceptional Paper Quality by Paper Money Guaranty and realized $27,600 at the Florida United Numismatists convention auction in January 2011 in Tampa.

For more information about the auction, visit the Heritage website or call the firm at 877-437-4824.