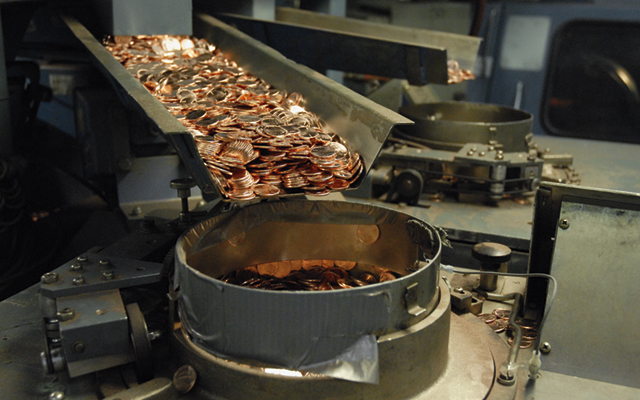 The United States Mint has produced hundreds of billions of coins since its establishment April 2, 1792, including this output of freshly struck Lincoln cents at the Philadelphia Mint, shown heading through the operation for counting and bagging before shipment to circulation distribution.

As I went through a $50 bag of pennies for a friend, I started to wonder about what really happens to old coins. I understand that the Mint destroys old worn out coins, but what exactly does it take for a coin to be taken out of circulation?

I would guess that they do not keep records on destruction of what was destroyed, or do they? If so, the mintages of what was produced are in error now as worn out coins get melted.

Without going into too much detail about the processes involved, the U.S. Mint identifies two broad categories of coins that are candidates for being removed from circulation to be melted.

One category is “Uncurrent Coins,” or those “U.S. coins which are merely worn or reduced in weight by natural abrasion yet are readily and clearly recognizable and machine countable.”

The other category is “Mutilated Coins,” or “all coins that are bent, broken, corroded, not whole, melted together and not machine countable,” according to the Mint.

When banks, coinage storage facilities, and other handlers of large numbers of coins receive coins in these two categories, they can ship them to the Mint for destruction and reimbursement. Private individuals can do this as well. See the guidelines for details on how to submit coins, but be aware that those guidelines are currently being considered for revision.

As to the coins in these two categories it destroys, the Mint keeps redemption records for coins by denomination or composition, not specific date or Mint mark.

In addition, precious metals U.S. coins have been melted by private firms for decades when the coins’ bullion content has exceeded face and numismatic value, again with no records kept.

The melting of all these coins, however, in no way changes a coin’s mintage.

By generally accepted definition, “mintage” refers to the number of coins struck, though for modern collector coins, “mintages” are actually net sales figures, not the number of coins produced. A coin with a mintage of 1.5 million pieces will always have a mintage of 1.5 million pieces, even if 1.25 million of them are withdrawn from circulation and melted.

What changes is the number of surviving pieces or survival rate.

At the best, collectors, dealers and other researchers can estimate the surviving populations for certain coins, through intense study of auction appearances, grading service population reports, and other sources.