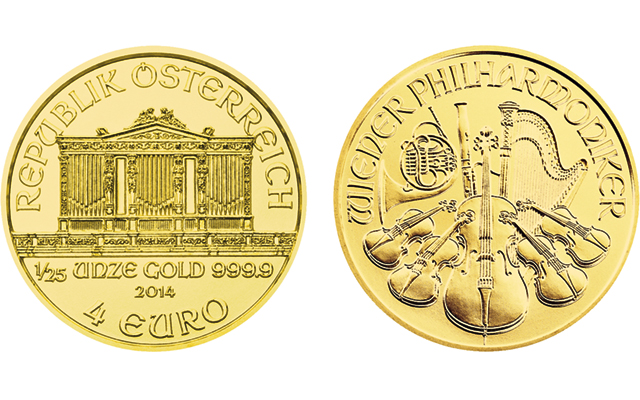 The quarter-ounce size of gold Philharmonic coin was initially produced as an affordable size for the Austrian populace to purchase, while the 1-ounce size was intended for investors.

The Austrian Mint is celebrating the 25th anniversary of the launch its Philharmonic gold bullion coin.

What better way to celebrate than with a golden anniversary cake, complete with the Philharmonic’s iconic logo featuring musical instruments of the world famous Vienna Philharmonic, the coin’s namesake?

During the recent American Numismatic Association World’s Fair of Money in Rosemont, Ill., I was both surprised and honored when Austrian Mint CEO Gerhard Starsich asked if I would assist him in cutting the cake.

Celebrations have a way of triggering flashbacks. The Austrian Mint’s October 1989 news release announcing its entry into the gold bullion coin market raised a few eyebrows. How could a relatively small Mint from a country with no active gold mines compete with the big players in the market, namely South Africa, Canada, Australia, and the United States?

When the United States lifted restrictions on ownership of gold at the end of 1974, the pent-up demand from U.S. buyers shocked the world. South Africa was the first to benefit because its Krugerrand was already in the marketplace. The Royal Canadian Mint launched the gold Maple Leaf in 1979. Western Australia’s Perth Mint and the U.S. Mint joined the battle for market share in 1986 with their gold Nugget and American Eagle gold bullion coins.

Armed with a proud tradition of designing and striking beautiful coins and a belief they could buy gold in the world market and supply coins at a competitive price for their domestic market, Austrian Mint officials moved forward after Austria’s government changed its currency regulations. (Previous to the change, foreigners could buy gold coins tax-free while Austrians were taxed.)

Initially the Philharmonic was produced in two sizes: 1 ounce and quarter-ounce, the larger coin for the investor market and smaller coin as “an affordable size for Austrians,” explains Kirsten Petersen, a 20-year veteran of the Austrian Mint’s international sales team.

Demand for gold Philharmonic coins in Austria was off the charts. Requests to buy, especially from other European countries, convinced officials to also open sales outside the country. During the first three months of sales, a total of 623,000 coins (totalling 419,000 ounces) were sold. In 1990 — the first full year of sales — the Vienna Philharmonic was the top selling gold bullion coin in Europe and ranked second as most popular worldwide. A scant two years later (1992), the Vienna Philharmonic became the world leader, capturing 30 percent of the world gold bullion coin market.

You made all of us believers.