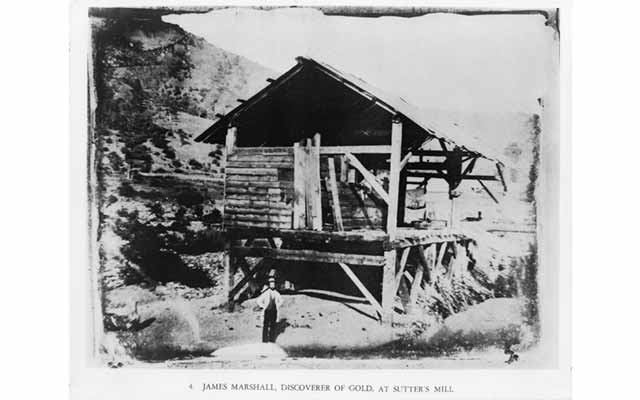 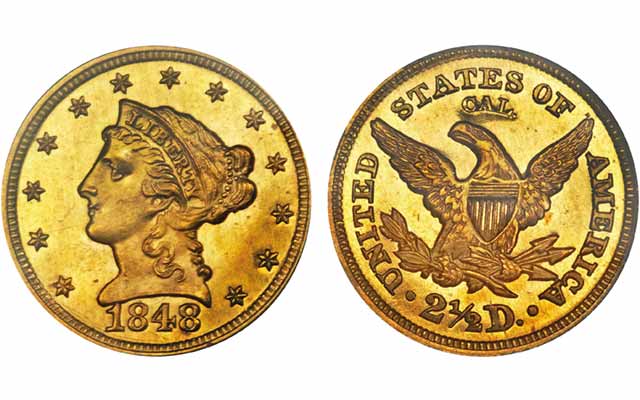 In 1848 the Philadelphia Mint struck 1,389 quarter eagles from gold rushed to the Mint from the California gold fields. Each coin had the abbreviation CAL. impressed on it. This PCGS MS-64 coin sold for $176,250 in January 2014. Images courtesy of Heritage Auctions. 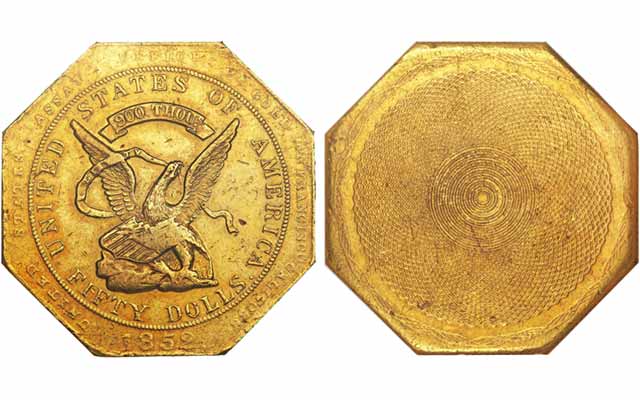 While the Appalachian gold strikes were the first in the United States, they were dwarfed by the California Gold Rush, which began with James W. Marshall’s Jan. 24, 1848, discovery of gold in the tailrace or water channel of a water-powered sawmill he was building for John Sutter about 35 miles northeast of Sacramento, Calif.

Marshall later recalled: “One morning in January — it was a clear, cold morning; I shall never forget that morning — as I was taking my usual walk along the race after shutting off the water, my eye was caught with the glimpse of something shining in the bottom of the ditch. There was about a foot of water running then. I reached my hand down and picked it up; it made my heart thump, for I was certain it was gold. The piece was about half the size and of the shape of a pea. Then I saw another piece in the water.”

While Marshall and Sutter tried to keep the find quiet, news quickly spread. “Soon the whole country was in a bustle,” Marshall recalled.

“I had scarcely arrived at the mill again till several persons appeared with pans, shovels, and hoes, and those that had not iron picks had wooden ones, all anxious to fall to work and dig up our mill; but this we would not permit. As fast as one party disappeared another would arrive, and sometimes I had the greatest kind of trouble to get rid of them. I sent them all off in different directions, telling them about such and such places, where I was certain there was plenty of gold if they would only take the trouble of looking for it. At that time I never imagined that the gold was so abundant. I told them to go to such and such places, because it appeared that they would dig nowhere but in such places as I pointed out, and I believe such was their confidence in me that they would have dug on the very top of yon mountain if I had told them to do so.”

Fortune seekers flooded into the area, first from California, then beyond. A San Francisco paper, the Californian, took up the story March 15, with a one-paragraph article declaring, “Gold has been found in considerable quantities.”

Mormons from the Mormon Battalion that fought for the Unites States in the Mexican-American War, settlers from Oregon’s Willamette Valley and even Hawaiians who learned of the strike from trading ships, pulled up stakes and made their way to California.

Tales of easy wealth started appearing in Eastern newspapers that summer. Those who could afford steamship passage around South America arrived in the gold fields that year. The masses of ’49ers, though, were young men without such wherewithal.

They waited until the Rocky Mountain passes were free of snow the following spring and set out by steamboat to St. Joe and overland trail by wagon train to the gold fields.

President James K. Polk’s State of the Union speech Dec. 5, 1848, fueled the fever. He said, “The accounts of the abundance of gold in that territory are of such an extraordinary character as would scarcely command belief were they not corroborated by the authentic reports of officers in the public service who have visited the mineral district and derived the facts which they detail from personal observation.”

In addition to personal observations, the federal government also had gold, real California gold straight from the diggin’s. On Dec. 9, 1848, the Philadelphia Mint received 228 ounces of California gold from Secretary of War William L. Marcy. The gold was used to strike 1,389 1848 Coronet $2.50 quarter eagles with the abbreviation CAL. on the reverse. The scarce coins, arguably the first U.S. commemorative coins, are highly sought after, with even damaged pieces commanding $25,000 and Uncirculated ones starting at $75,000.

In California, there was no federal Mint to covert newly mined gold into coin. Entrepreneurs filled the breach, shipping in supplies, furnaces and presses so they could assay native gold, cast it into ingots for shipment to the Philadelphia Mint and strike coins.

Norris, Gregg, & Norris was first up, striking gold $5 pieces in May 1849. An article in the May 31, 1849, Alta California indicates the first pieces superficially resembled U.S. Mint half eagles, with Liberty on the obverse and an eagle on the reverse. None have survived. The company ceased operation in 1850, after striking half eagles from different dies in Benicia and Stockton.

Moffat & Co. opened for business in June 1849, smelting and assaying gold and casting small-denomination ingots as coin substitutes for two months before switching to coins.

Moffat’s $5 and $10 coins superficially resembled U.S. Mint coins, but like all nongovernment-sanctioned pioneer gold pieces, they were not acceptable as payment for customs duties.

Walter Breen wrote in his Complete Encyclopedia of U.S. and Colonial Coins, “The Custom House (source of almost all necessary goods other than the few locally made) would release nothing except in exchange for treasury notes, legal tender foreign coins or federal silver or gold – siphoning off most of the specie that managed to enter the area.”

In 1850, the U.S. Congress rejected a call for a Branch Mint at San Francisco but did vote Sept. 30 to create an Assay Office at San Francisco. The office, under the direction of Augustus Humbert was authorized to create $50 “ingots” (octagonal pieces known to collectors as “slugs”) that would be acceptable in payment of customs duties. On Jan. 7, 1852, the Assay Office — actually a provisional U.S. Mint — was authorized to strike $10 and $20 coins that would also be accepted at the customs office.

In an April 14 report to Treasury Secretary Thomas Corwin, Moffat & Co. reported, “The effect was instantaneous and overwhelming; the private mints were at once compelled to suspend operations, and their issues amounting, we have reasons to believe, to a million and a half, have since been purchased at a discount of from 5 to 10 percent, and it is not at all likely that another private coin will ever be struck in California.”

That prediction, though, proved inaccurate.

In 1852, as California continued to grow, Congress finally authorized the establishment of a Mint at San Francisco. The Mint began operation in April, 1854, five months after the U.S. Assay Office ceased operation.

Commerce suffered during the gap, and area merchants and bankers petitioned private assayers to again strike coins. Kellogg & Co. and Wass, Molitor & Co. stepped up, producing pioneer gold coins that year and the next while the Mint geared up for full production.