A medal bought on eBay for $74 could be worth more 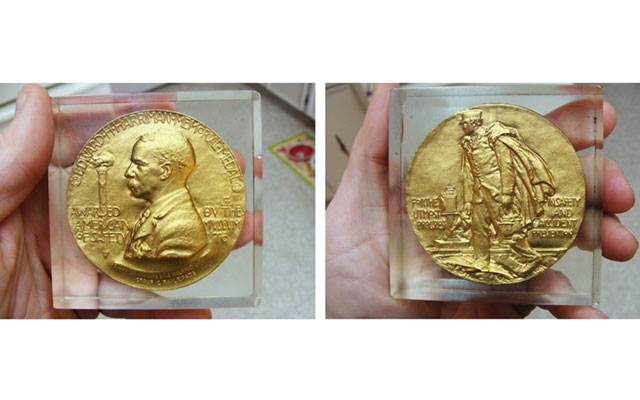 Collector Alan Neuman wonders whether his Lucite-entombed E.H. Harriman Award medal purchased for $74 on eBay is 20-karat gold or another version of the medal.

Back on April 2, I purchased on eBay for $72 a medal identified as such:  “Beautiful Harriman Memorial Medal in Gold. 70 mm. 238 grams. Similar to the Lot #10102 Sold in St Louis, MO (CSNS) Heritage Signature Auction #372. That medal was produced by Tiffany and Co. and struck in 20 karat gold. This piece encased in Lucite. It appears these medals were designed by James Earl Fraser. His signature logo appears on the obverse. Awarded to Bessemer and Lake Erie Railroad as a Class C Line based on number of employees in 1999 by American Museum of Safety. Unique as such.”

Could it be the gold medal presented to the railroad?

Neuman added that he strongly believes it is gold based on his experience with “patina, strike and feel.” If it is, in fact, the gold medal presented to the Bessemer & Lake Erie Railroad, it would be worth several thousand dollars just for its gold content. Since it’s encased in Lucite, determining whether the medal is made of gold or is a base-metal piece that is gold-plated or even plated with something else would take some effort. Neuman might have to remove the medal safely from the Lucite and have the medal tested through nondestructive means.

The E.H. Harriman Award was presented annually from 1913 to 2012 to American railroad companies in recognition of outstanding safety achievements.

Medallic art specialist David T. Alexander, to whom Neuman also sent images, offers the theory the Lucite-entombed medal might be an electrotype — composed of two gold electrolytic shells, joined, with the space between filled with lead.

“The textured edges are typical of electrotypes, with the texturing disguising the seam that identifies electrolytic copies however skillfully made,” Alexander writes.

The Harriman Award Museum verifies the award of a gold medal to the B & LE railroad in 1999. As to what happened to that gold medal since it was presented, none of my contacts has yielded results.