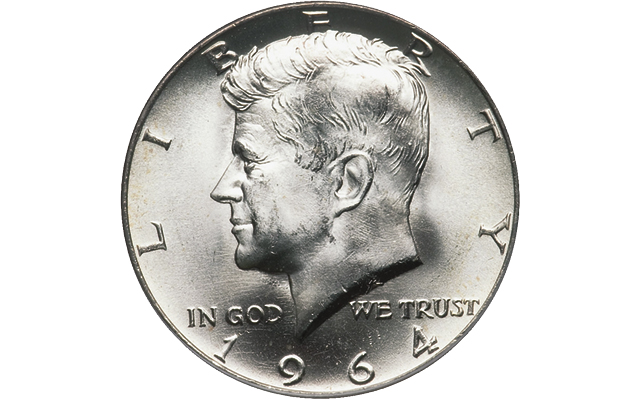 First lady Jacqueline Kennedy is reported to have recommended modifying the original portrait for the half dollar. This modified version with more subdued hair will appear on the Kennedy 50th Anniversary half dollar obverses. 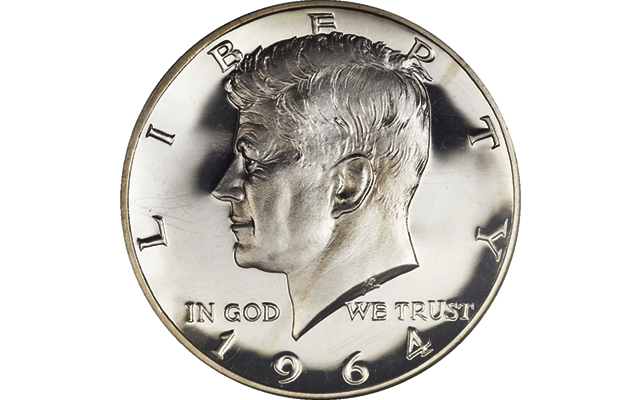 The first obverse die used to strike Proof 1964 Kennedy half dollars is what collectors refer to as the Accented Hair variety because of hair strands that form a “frosty W” above Kennedy’s ear. 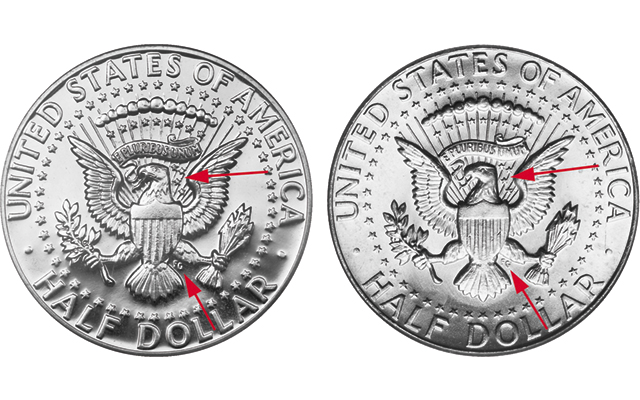 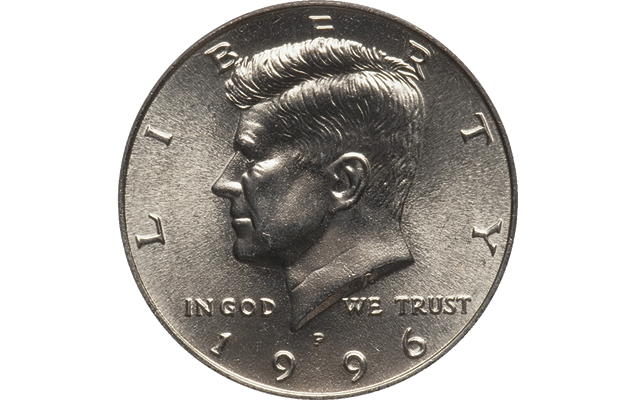 In 1996, the obverse was made concave rather than convex, creating an illusion that the relief was lowered. 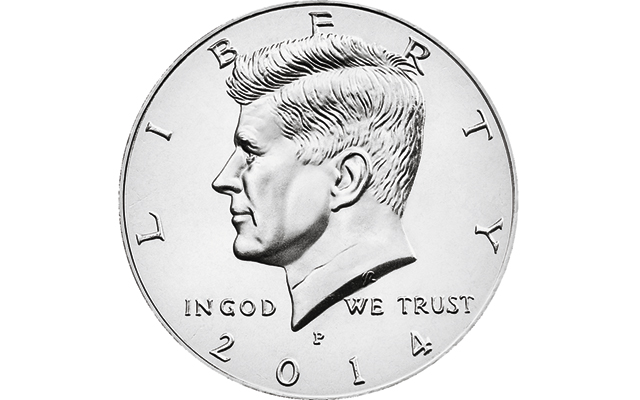 Kennedy’s portrait as it appears on a 2014-P half dollar from the annual Uncirculated Mint set. 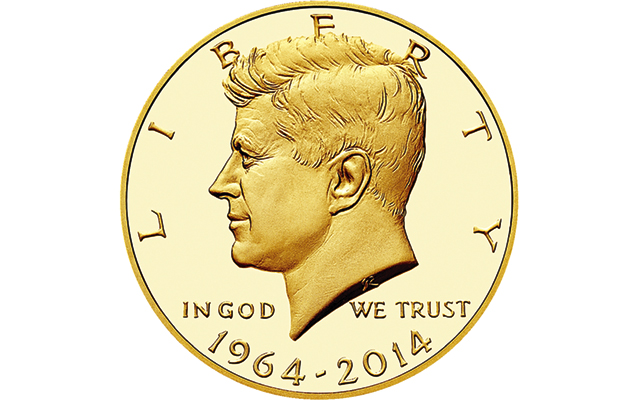 The portrait on the obverse of the Proof 1964–2014-W Kennedy 50th Anniversary gold half dollar exhibits U.S. Mint Chief Engraver Gilroy Roberts’ 1963 sculpt based on an earlier medallic portrait of President Kennedy.

The Kennedy half dollar underwent a number of revisions after its early-1964 debut.

With the 2014 release of the 50th Anniversary Kennedy half dollars in .9999 fine gold, .900 fine silver and copper-nickel clad versions, the obverse returns to U.S. Mint Chief Engraver Gilroy Roberts’ 1963 sculpture, based on an earlier medallic portrait of President Kennedy. The version used, however, is not the 1964 Accented Hair design variant.

When the first Proof 1964 Kennedy half dollars were struck, the end result is what collectors refer to as the Accented Hair variety. Additional strands of hair above Kennedy’s ear help form the appearance of an inverted wishbone.

According to Numismatic Guaranty Corp., to attribute the Accented Hair variety, look for the “frosty W” shaped pattern of incuse lines in the hair above Kennedy’s ear to identify this variety. Examples of the Accented Hair coins can be found unattributed in 1964 Proof sets.

Another obverse diagnostic is that the I in LIBERTY on the Accented Hair variety is shorter when compared to the more common variant.

It has been written that the slain president’s widow, Jacqueline Kennedy, was dissatisfied with the Accented Hair version and requested modification.

Some researchers suggest that 1 percent to 3 percent of the Proof 1964 Kennedy half dollar production is from the Accented Hair variant. The extant population of Accented Hair coins is suggested at between 40,000 and 120,000 coins.

Since its introduction, the Kennedy half dollar has been subjected to annual evaluation to determine if any modifications should be made to strengthen design details.

The examination is part of a broader program, whereby each denomination is examined, with one selected for possible refinement.

Among the refinements chosen in 1991, the part in Kennedy’s hair was returned and hair details were sharpened.

In 1996, the obverse of the Kennedy half dollar was again modified. The change transformed the obverse from convex to concave, but the change created the illusion that the relief was lowered.

The obverse of the Kennedy half dollar has remained unchanged in recent years, as it appears on the coin in the 2014-S Silver Proof set, on the 2014-P and 2014-D copper-nickel clad coins in the annual Uncirculated Mint set, and on the circulation-quality coins offered for numismatic sale.

The 1963 sculpt of Kennedy by Roberts has been adapted for use on the obverse of the seven 50th Anniversary Kennedy half dollars to be offered as numismatic products in 2014.

In addition to the dual-dated Proof 1964–2014-W Kennedy 0.75-ounce .9999 fine gold half dollar to be offered individually beginning Aug. 5, the U.S. Mint is issuing a two-piece copper-nickel clad half dollar set and a four-piece set in silver.

Sometime this fall, the 2014 50th Anniversary Kennedy Half Dollar Silver Coin Collection will be offered, priced at $99.95. The set will contain one .900 fine silver coin from each of the four Mint production facilities, and each will have a different finish:

Scott Schechter, a grader for Numismatic Guaranty Corp. and co-author with Jeff Garrett of 100 Greatest U.S. Modern Coins, says that for circulating U.S. coin denominations, lowering the relief has, without exception, “diminished the aesthetic character and quality of our coins.”

“Over time, Lincoln and Washington morphed into caricatures on the cent and the quarter,” Schechter said. “The Kennedy half dollar was certainly spared the worst of it. Its comparatively low mintage and also maybe its larger size likely meant that less tinkering was necessary to adequately optimize production capacity.

“Thankfully, the Mint is aware of its failing. They remodeled the portrait profiles on the modified ... cent designs in 2009 and 2010 and again when they launched the America the Beautiful quarters to align them with the original. Rightly, they want to do it again with the Kennedy half dollar and reconnect with Gilroy Roberts’ original vision.”

“No mint must produce nearly as many coins as the U.S. Mint,” Schechter said. “We should expect to see coins struck with diminished detail as a result of die fatigue. But we shouldn’t expect the devices of our coins to gradually depart from the original, approved designs until we are left with much inferior vestiges.”

Keep up with Coin World's news and features: