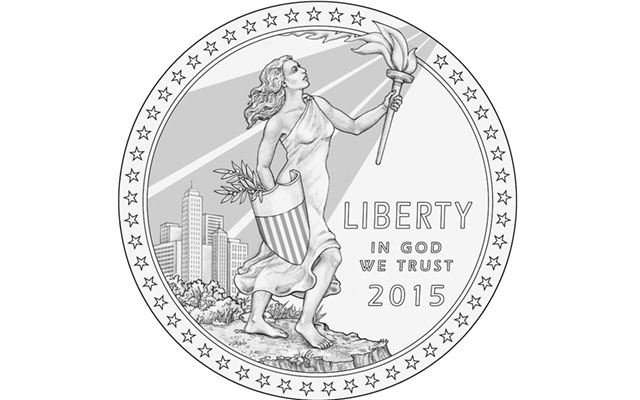 Proposed design for the 2015 High Relief gold $75 coin tries to do too much with symbolism, the writer believes. Image courtesy of U.S. Mint.

Thanks to Coin World, I have been reading about and reviewing online the designs reviewed by the Commission of Fine Arts for the new High Relief gold coin to be issued in 2015.

I must admit that the process used to propose and select designs and other characteristics for U.S. coins frustrates me a great deal. Why isn’t the numismatic collector more a part of this process? Clearly as the ultimate “consumer” of Mint products, we as customers should have some voice in design considerations.

Now comes another obvious example with the proposed new coin that we were initially told would continue in the tradition of the 2009 Ultra High Relief, a highly successful and certainly most beautiful coin the Mint has produced in recent years.

Firstly, presumably without any collector input, authorities have now decided to increase the size and reduce the relief, which immediately makes this coin “something else” from what collectors hoped the Mint was attempting, which was a new entry in a series begun with the popular 2009 coin. Ultra high relief was a huge part of what made the Saint-Gaudens coin special. Every coin collector and numismatist knows this. Why doesn’t the Mint?

Secondly, for reasons unfathomable, this coin is to sport a denomination of $75. If this were to be a successor to the 2009 UHR, should it not retain status as a double eagle and keep the $20 face value? Even at $50, we could call it an American Eagle. Why is it a good idea to have so many equal weight bullion coins with so many different denominations? Are we seriously to consider this new coin as a “septo-and-a-half eagle” (or tri-deci-quarter eagle”)?

Lastly, I would mention design issues. In fairness to the artists of the designs, I was certainly impressed with the creativity and execution of some of the concepts submitted. Yet many of the designs seem overcharged with symbolism to the point that it detracts from the esthetics. In extreme cases, it borders on the cartoonish. The current shield reverse of the Lincoln cent is a conspicuous example of symbolism overwhelming artistic considerations. I don’t know of anyone, inside the hobby or out, who considers that design a success by any artistic measure.

In terms of the proposed coin in question, one example in particular illustrates my point, though alternatives could easily have been selected from the submitted designs. Here we see Miss Liberty uncomfortably carrying a torch, an olive branch and a shield. She glances upward, perhaps thinking about what items she forgot (the arrows that go with the olive branch?) as she absentmindedly is apparently about to stride off a cliff! The unidentifiable city and abstract sun rays in the background merely add symbolic noise to whatever overall signal this design is meant to convey.

To me, the beauty of Saint-Gaudens design was that it was an artistic composition first, which nonetheless managed to gently incorporate understated symbolic elements into a coherent image. More subtlety, more artistry, and a bit less overt symbolism would improve these modern concepts in my opinion. I imagine many in our hobby would agree.

I think it’s reasonable that numismatists as a group have well developed artistic sensitivities when it comes to coins. Arguably no one looks at or studies them more than we do. For this reason I wish our opinions were more valued regarding artistic and other considerations of what coins are produced. Whatever the Mint’s original intentions for this new coin, given the choices being made, it is hard to believe it will be a worthy successor of the 2009 UHR.