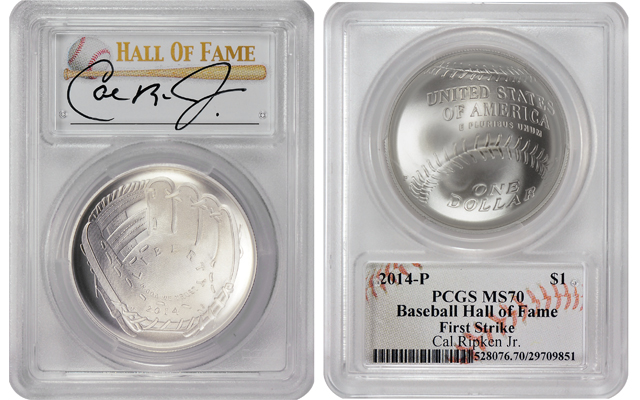 After the frenzy of the first few months, prices for these have settled down. Here’s a look at the silver dollar in the marketplace.

The story: With initial ordering limits of 100 coins per household of each type, Proof and Uncirculated, it took several weeks for the silver dollar to sell out. On April 10, 2014, the Mint confirmed the sellout of 400,000 Baseball silver dollars at introductory prices of $47.95 for the Uncirculated coin and $51.95 for the Proof dollar.

Prices quickly shot up in the secondary market to the $90 per coin level and that held for the first month. Starting in May, prices began a gradual decline and today wholesale dealers are trading Proof dollars at the $65 level with Uncirculated pieces at $60 each.

An area where substantial interest is seen is with the PCGS labels signed by baseball players enshrined in the National Baseball Hall of Fame. The PCGS autograph program includes Cal Ripken Jr., Reggie Jackson, Ernie Banks and Tony LaRussa, among others. PCGS “First Strike” examples of these in Proof 70 Deep Cameo and MS-70 routinely bring between $400 and $500 when offered at auction.