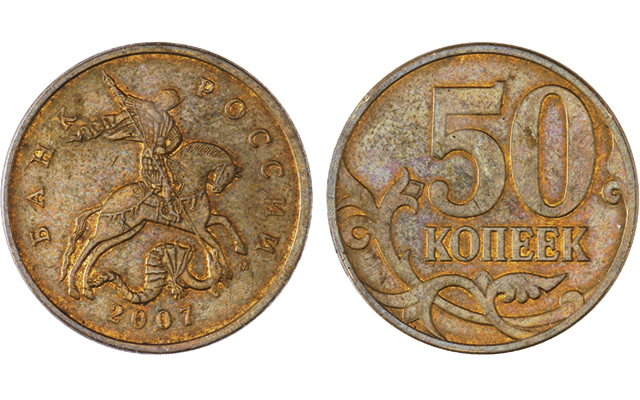 This 2007 Russian 50-kopek coin was found by a Coin World staffer in change recently. How did a Russian coin make its way to Sidney, Ohio? That’s the question still awaiting an answer.

I found what appears to be a Russian coin in my change. Is it worth anything?

You’ve probably heard of someone writing a letter to her future self about some encounter or experience.

This Readers Ask is a bit like that. I found the coin I am writing about, so I’m the one who can tell the backstory.

As a Coin World staff member I’m very used to answering questions about coins, paper money, medals, tokens and other odd bits that our readers ask about.

But this time I had my own questions, about an odd coin I found in my change.

I had a small change purse overflowing with coins. It was time to take them to my bank’s automated coin counting machine and redeem them for folding money.

Often a bent or discolored Lincoln cent or a Canadian 10-cent gets kicked out in the reject slot of the automated counter. Sometimes I can just drop rejected U.S. coins back into the machine, and it will count them.

When I heard a coin clink into the reject slot, I expected the usual. But lo and behold, I found instead a slightly worn coin that looked like it had Cyrillic lettering.

I finished my business at the bank, and when I got back to the office the identification hunt was on!

The obverse design shows St. George on horseback, about to spear a serpent. The design seems to be a slight variation on Great Britain’s St. George and the Dragon design.

The reverse shows 50 KOHEEK, 50 kopeks, as the denomination. A stylized vine completes the reverse design.

The 2007 19.5-millimeter brass-clad steel coin with a smooth edge is a product of the Moscow Mint in Russia. The Mint mark, an “M” located under the front left hoof of the horse on the obverse, indicates it was struck in Moscow.

However, the magnetic “signature” or metallic composition of the Russian coin differs from a Lincoln cent and earned the 50-kopek piece its kick to the reject slot.

As to its value — minimal.

How did it get here? A good question, but one without an answer as yet.

But it makes a great story.