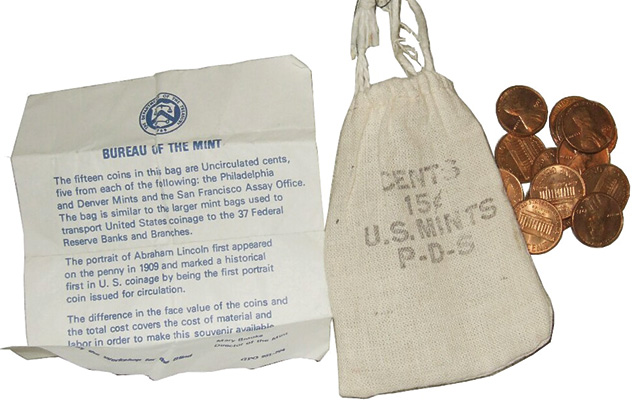 An opened 1973 “Penny Bag” exhibits 15 Lincoln cents — five each from the Philadelphia, San Francisco and Denver Mints — and a content certificate from the Mint.

A curious product offered by the U.S. Mint in 1973 was the “Penny Bag.” It consisted of a small canvas bag that was a miniature replica of the large bags used to transport coins from the Mints to the 37 Federal Reserve Banks and Branches. Inside were 15 Uncirculated cents, five each produced at the Philadelphia, Denver and  San Francisco facilities.

For a month-long period early in 1973, bags containing 1972 cents were offered by mail order at prices starting at $2 for five bags, and priced at just 32 cents per bag when purchased in quantities of 25 bags or more. During the summer of 1973, similar versions of these bags containing 1973 Lincoln cents went on sale at the same prices.

The cents from 1972 are storied. Nine collectible doubled die obverse varieties can be found among  the 1972 Philadelphia Mint cents. The most dramatic doubled die variety among the bunch is considered one of the great doubled dies in the Lincoln cent series. A minor doubled die from the Denver Mint also commands a premium.

Condition sensitive collectors also pay keen attention to these dates, normally pursuing certified examples of the 1972, 1972-D, 1972-S, 1973 and 1973-D cents graded Mint State 66 red. These coins command prices ranging from $20 to $40 when certified by Numismatic Guaranty Corp. or Professional Coin Grading Service. They are all very scarce in MS-67 red,  and bring prices from a few hundred to several thousand dollars, depending on the issue.

The 1973-S Lincoln cent is the standout condition rarity because it was poorly made and exhibits numerous planchet issues. Certified MS-66 red examples can be tricky to locate, and trade for a couple hundred dollars. It is a major rarity in MS-67 red.

The “Penny Bags” are a good source of nice Uncirculated examples as well as a fun collectible. The offering clearly met with some success when originally issued, as examples with coins from both years are still readily available in the secondary market today. They can be purchased for about $4 per bag. The 1973 set is easier to locate than the 1972 set, suggesting that sales were better for the second issue than the first.

But after only two issues, the Penny Bag was discontinued. The likely reason is part of the lore of the 1974 Lincoln cent. During the first three  months of 1974, demand for the cent exceeded 2 billion coins, doubling demand from the prior year. According to a U.S. Mint press release, “This unprecedented increase in the outflow of pennies ... can only be attributed to speculation that the metal content of the penny will ultimately exceed its face value.”

Beginning April 15, 1974, new regulations made it illegal to melt copper cents. And, of course, no 1974 Penny Bag was offered.