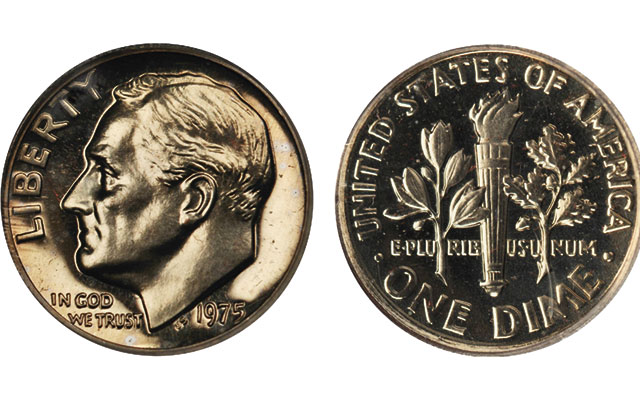 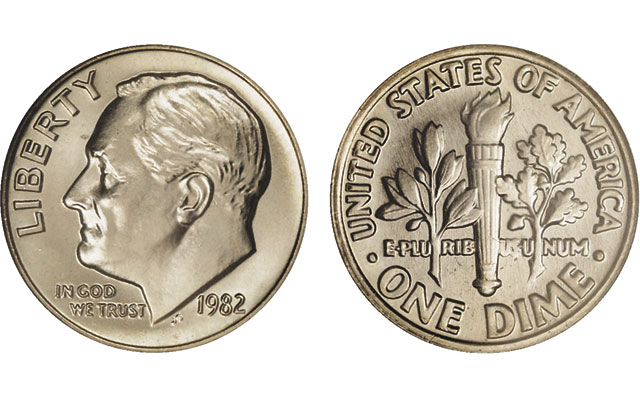 Two different versions of the 1982 Roosevelt, No P dime were struck and released into circulation, including this version with a strong strike. 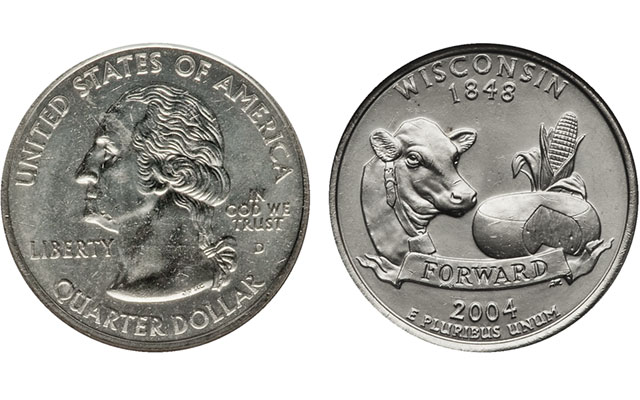 This 2004-D Wisconsin quarter dollar has an extra leaf in the high position. 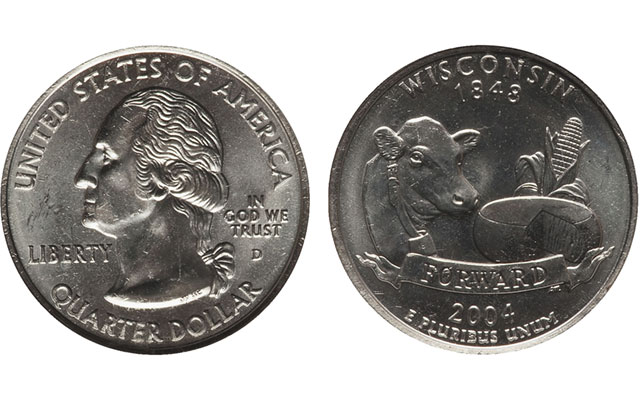 This 2004-D Wisconsin quarter dollar has an extra leaf in the low position.

Read the first post in our series on 50 years of clad coinage:

A complete clad coinage set contains one of the rarest United States coins and some of the most common.

At the other end of the scale are hundreds of date and Mint mark combinations with mintages in the hundreds of millions and billions.

Before the introduction of clad coinage, collectors delighted in circulation finds. Hobby publications were filled with reports about lucky finds of 1909-S Lincoln, V.D.B. cents and 1932-D Washington quarter dollars. Even on the elementary school playground, kids were telling tales about finding 1955-S cents — the hardest hole to fill in the popular Whitman Lincoln Cent Book II coin folder.

Clad coins, which are struck by the billions each year, offer few opportunities for pocket-change collecting. None of the hundreds of date and Mint mark combinations is even remotely scarce in circulated condition.

Just three coins — a dime and two quarter dollars — stand out as worth looking for in circulation, and all are errors.

The 1982 Roosevelt, No P dime touched off a wave of change-scouring when stories started appearing in Ohio and Pennsylvania newspapers about the discovery of odd dimes that did not have a Mint mark. Since 1980 every circulating coin, except cents, has a Mint mark above the date. These dimes, though, were blank.

The Philadelphia Mint had neglected to place a Mint mark on two dies. Coins struck by the rarer of the two dies — “strong strikes” — surfaced in Sandusky, Ohio. Many were unknowingly given out in change at the city’s Cedar Point Amusement Park. Less desirable coins came from the second or “weak strike” die. These were released in Pittsburgh.

Strong-strike 1982 No P dimes catalog for $200 in MS-65 in Coin World’s Coin Values. Weak-strike coins are not cataloged there, but tend to sell for less than half of strong-strike coins.

Twenty-two years later, another Mint error commanded the public’s attention — 2004-D Wisconsin quarter dollars with extra corn leaves. These were released in the Tucson, Ariz., area, though there have been scattered reports about finds in other parts of the country.

Over the years several theories have been put forth for the coins, ranging from playfulness on the Denver Mint’s night shift to damage caused by a dropped piece of equipment.

The High-Leaf coins catalog for $300 in MS-65 in Coin World’s Coin Values. Low-Leaf coins are valued at $200 in the same grade.

Some clad coins, especially from the early years, tend to be scarce to rare in high grades. Several dimes, quarter dollars and half dollars command prices of $500 to more than $1,000 in MS-67 and higher.

Early clad coins, too, weren’t save in bulk, making it difficult now to buy “fresh, BU rolls,” he said. “I honestly believe the lack of nice clad coinage from the early days of clad was due to no one caring. The focus was avoiding these coins! Everyone’s focus was SILVER. Coin collectors flocked to banks going through fresh change and looking for Silver.”

Uncirculated Mint sets, a common source for higher grade Uncirculated pieces, were badly produced and badly packaged. “They most certainly went through normal mint processing down to coin bins banging together. Looking at 1970s mint sets with a loupe you will see many small scratches. It appears as if the mint swept the floor with these coins before they put them in the cellophane!”

Quarter dollars from 1982 and 1983 are the worst of the worst. While mintages run in the half-billion range, almost all are dogs. The 1983-P Washington quarter dollar is particularly hard to find in nice Uncirculated. The coin catalogs for $25 in MS-60 in Coin World’s Coin Values.

Some clad coins, notably the 1996-W Roosevelt dime and 1970-D Kennedy half dollar, were produced in circulation-strike quality, but were not placed in circulation. The only way to get them was in Uncirculated Mint sets.

The 1996-W dime, the first dime to bear a West Point Mint mark, was placed in that year’s Mint set to mark the 50th anniversary of the Roosevelt dime. In MS-65 the coin catalogs for $25 in Coin World’s Coin Values.

The 1970-D half dollar caught the collecting world by surprise. While it’s bracketed by high-production Denver Mint mintages, only 2.2 million were struck, all for placement in that year’s Uncirculated Mint sets. In MS-65, the coin catalogs for $65.