Franklin half dollar is a bold cameo: Market Analysis 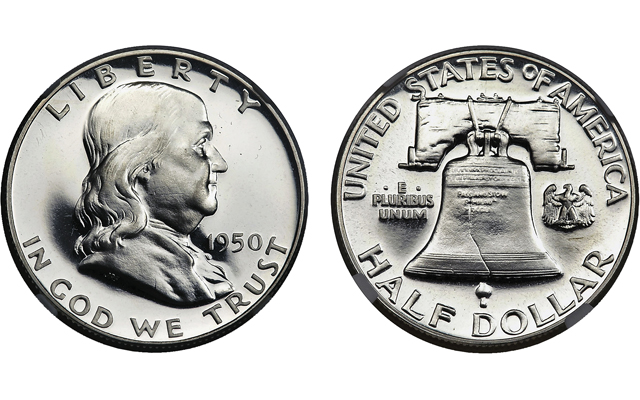 The Story
1950 represents the first year of the Proof Franklin half dollar, and Proof examples were struck at the Philadelphia Mint each year until the series ended in 1963.

This example graded Proof 67 Cameo by Numismatic Guaranty Corp. has virtually no toning, and as Heritage notes, “Unlike many of the 1950 proofs, there are no distracting hairlines from overzealous die polishing.” The result is that the frosted devices contrast against the mirrored fields. It sold for $9,987.50.

This example is among the finest graded with just one NGC example in a numerically finer grade with Cameo designation. Deep Cameo examples are extremely rare with just a handful known, although with a mintage of 51,386 pieces it is somewhat plentiful in lower grades, with the typical example grading Proof 64 to Proof 65. At the same auction, a Professional Coin Grading Service Proof 64 Cameo example realized $763.75.