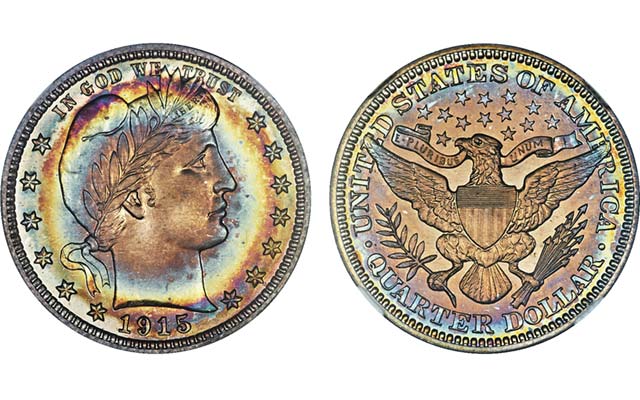 Many of Gardner’s coins were purchased at auction in recent years, including this 1915 Barber quarter dollar graded Proof 68 ? by Numismatic Guaranty Corp. that was last sold at Heritage’s Nov. 16, 2013, auction of Eric P. Newman’s collection where it brought $19,975.

At Gardner’s sale it sold for $15,275, still representing a strong price for this issue, of which 450 Proof pieces were produced. It features the lowest Proof production of the series and this is the only one of the five examples graded Proof 68 by NGC to carry an NGC ? designation signifying exceptional eye appeal. There are also three graded Proof 68 Cameo by NGC, including one with an NGC ?.

This example is characterized by beautiful toning in even, concentric circles as often seen on Newman’s silver Proof coins, and many of Gardner’s as well.