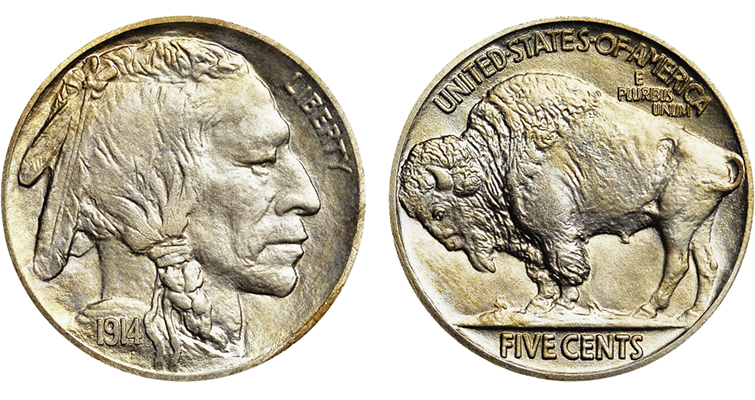 While most collectors think of Newman’s coins as being generally older, classic 18th and 19th century issues, he also collected many 20th century coins like this 1914 Indian Head 5-cent coin. Graded Proof 67 by NGC with a green CAC sticker, it was acquired by Newman for $5 in the mid-20th century as part of his purchase of the E.H.R. Green estate.

When Heritage sold it at its Nov. 15, 2013, Newman II auction, the handsome, lightly toned 1914 “Buffalo nickel” with a low mintage of just 1,275 Proof examples brought $4,993.75. It was reoffered in the same holder less than a year later at Stack’s Bowers Galleries’ Aug. 8, 2014, American Numismatic Association auction where it brought $4,406.25, representing a modest loss in value.

As David Lange writes in his reference on the series: “The Philadelphia Mint finally polished its technique for producing Proof nickels starting with this issue. The Proofs of 1914 to 1916 are of far more consistent quality than the 1913 pieces. The texture of these coins is of an even finer grain, giving them a particularly pleasing satin finish.”