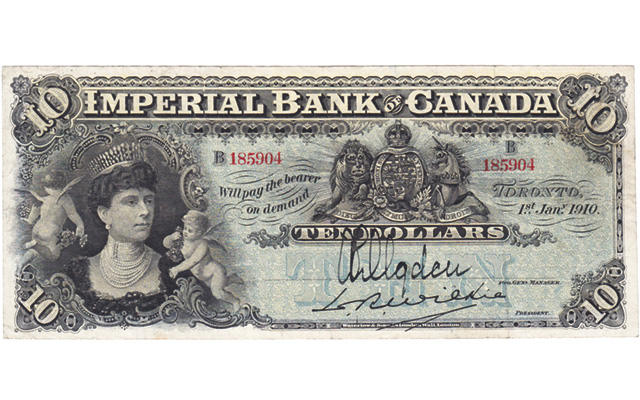 A $10 note from the Imperial Bank of Canada sold in a Nov. 22, 2014, auction by Geoffrey Bell Auctions in New Brunswick, Canada.

The note, printed by Waterlow & Sons features a portrait of Queen Alexandra on the face. The scarce note, graded Very Fine by the auction firm, features the scarce “yellow brown” back design.

In another highlight, a 1912 $5 Dominion of Canada note sold for $3,240. The note features a rushing locomotive pulling many train cars.

Also sold was a cut and fold error 1954 Bank of Canada $2 note graded Extremely Fine/About Uncirculated by the firm. The note sold for $1,560.

For more information on the sale and future auctions visit the firm’s website.